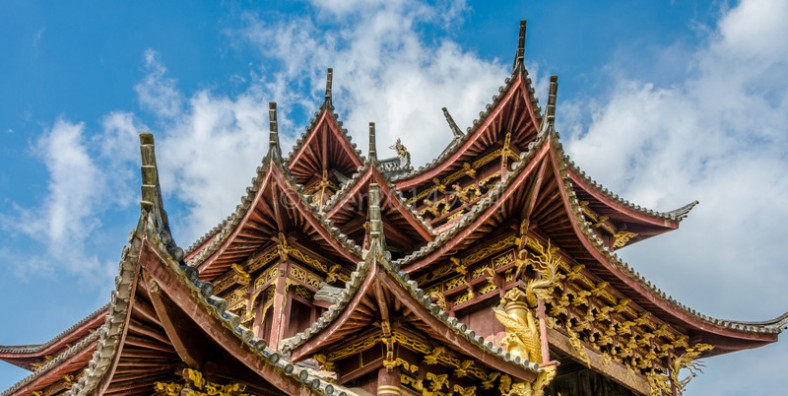 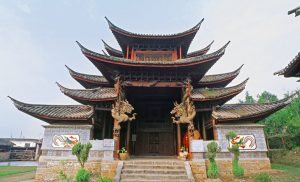 Guangyun Burmese Temple is one of the most influential temples that have influence on Theravada Buddhism among southwestern ethnic groups of Yunnan. It is a Theravada Buddhism building that located in the north of Mengdong town in Canyuan county, which is built in Qing dynasty, and also called “Xuetang Burmese Temple”. It is has been 170years since Guanyuan Burmese Temple was built in 1828, when Wang government has a civil war with GengMa chieftain and then appoint HanRonggao as a new chieftain. Its constructing style was influenced mostly by Han people; meanwhile, it maintained the basic style of Theravada temples. It is a combination of external style of Han buildings and internal decoration style in courtyard of Dai people, such a unique construction style it is! Guangyun Burmese Temple was listed into the third batch of national key protection cultural relics by the State Council on January 13, 1988, due to its important position of history, territory, humanity cultures and religions.

Why is Cangyuan Burmese Temple?

Guangyun Burmese Temple was built in Qing Dynasty, enjoying the history of 300 years. It is the important temple of Hinayana Buddhism. It is also the most well-preserved temple and one of three ancient architecture of Yunnan Province.

How to get to Cangyuan Burmese Temple?

The maintained relics of Guangyun Burmese Temple are main temple hall and 2 gates. The main temple hall lies from north to south, with 14.8 meters width, 24.4 meters length. It enjoys a fancy wooden structure, which is combined by corridor shrine and multiple eaves pavilion. The pavilion lies in front of the palace hall, forming the hallway, and two giant wooden dragons hung upside down each of the two pillars before the door. The pavilion is a double rests the brick structure building, and the eave is typically Qing style decorated with brackets. The first floor’s eave of the pavilion is equally high to the first floor’s eave of the opisthodomos; so is the second. What’s more, a fake doubled-eave is added to the corner of the eave, so all these make the two sides of the pavilion to form a five double-hipped roof structure. The main temple hall is three-drop-water irimoya, the side face of the third eave below the roof and the back of the hall round into a gallery, this covers the style of Han buildings and Dai temple. Apart from these two giant wooden dragons, the rest part of the Guangyun Burmese Temple, the doors and the windows are all in skilled openwork wooden carving. 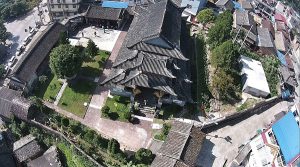 Ten frescos are painted on the hall, most of the frescos are ink painting, added other color later on, and the style and the skill are similar to inland works of Ming and Qing. The 6 paintings on both sides are pretty large; each painting is of 3 meters width, 2.1 meters height, among them, 4 paintings are inserted with windows, so the painting is representing a concave font. The other 4 paintings near the knutsford terrace are a little smaller, with 1.3 meters width, 1.2~2.1meters height, among these 4, 2 paintings are about Buddhist content, and the buildings in the paintings mostly are double rests the brick structure building belonging to Han style, as for the figures, there are officers, women, soldiers and attendants, they are in different ethnic groups judged from their costume. The warrior wore a cap, and a typically Qing styled horseshoe-shaped small cuff jacket.

Wengding Wa Ethnic Village(翁丁佤寨) is an over 400 year-old Wa ethic village. Wengding means where the clouds are floating since mists often cloak the mountains throughout the year. People who live there have been called“ the last tribe of China’’,it has preserved the typical style of Wa residential architecture and primitive folk customs. Surrounded by lush trees, the village consists of 98 households with over 400 residence Of Wa people. The local elder stated that the woods protect the safety of the village. Inside of village has the best preserved cottages, totem, the woods, Village pillars and worship places, which reflects the splendid history and culture of Wa people. Black is auspicious color of Wa people. The elder, men and women, prefer holding tobacco pipe when they are free.

Cangyuan Cliff Painting (沧源岩画), the oldest cliff painting of China, enjoys the history of 3000 years. It is painted with red paint with fingers or feathers. Pigments may be made from animal blood and hematite powder. The cliff paintings mainly describe the hunting activities, production activities and entertainment activities etc. There is also a war triumph, a picture of the bamboo house and the people who hold the weapon and get back with victory. The rough and simple painting is an important material for studying the history of the ancient nationalities of south of China.

Respect the beliefs of Buddhist.

Do not shout in the temple and keep quiet.