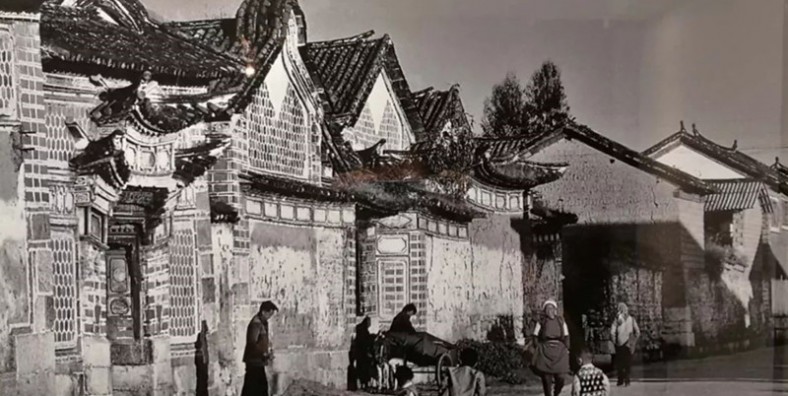 Xizhou Ancient Town is a famous cultural town, enjoying the history of more than one thousand years. It was the center of west bank of Erhai Lake in terms of culture, politic and economy in the past. The elegant ancient town is like a architecture museum, covering typical Bai’ s residence houses of different dynasties. Xizhou is going to show you the Bai minority cultural, the local people’s daily life and natural beauty.

Why is Xizhou Ancient Town so special? 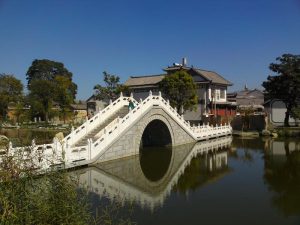 Walking along the slate road, sauntering though the winding alleys, visitors can have a good look at the delicate and intricate designs on the walls.

The houses of local residents are characterized by a traditional Chinese rectangular courtyard with a screen wall facing the gate. On the screen wall there are usually four Chinese characters, reading ‘Qingbai Shijia’ (innocent family) or ‘Ziqi Donglai’ (Auspicious air comes from the East). Around them are landscape paintings and decorations with profusion of colors. The doors and windows are full of grills with auspicious paintings. In Xizhou, visitors also have the opportunity to appreciate the genuine tea ceremony of the Bai minority. Sandao Tea is a must-drink. It consists of bitter tea, sweet tea and aftertaste tea, indicating the whole life of the people.

Where is Xizhou Ancient Town?

Xizhou is located 20 km north of Dali old town and about 35 km from Dali new city, Xiaguan. It is located on a fertile plateau between the Mt. Cangshan range to the west and Erhai Lake to the east at an elevation of 2000 meters.

Distance from other attractions:

About 19 km from Cangshan Mountain.

About 6.9 km from Butterfly Spring.

How to Get to Xizhou Ancient Town?

Taking midi bus from ancient city or Xiaguan to Xizhou, people can hail the bus along the Yunnan-Tibet Highway. From Xiaguan to Xizhou, there are 30 minutes. Xizhou is a short bus ride from Dali’s old town, accessible by buses from both the 214 highway and the Dali-Lijiang road (大丽路). Xizhou is small enough to walk through its entirety in a few minutes, but horse carts and bicycles are a popular mode of transportation. People can turn back in a day, but also can stay overnight in Xizhou and take part in the local evening party. And people can pay visit to Butterfly Spring and Zhoucheng city around. 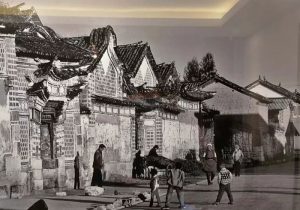 Xizhou is an old town of long history. Early in Han Dynasty, it belonged to Yuyu county. In Nanzhao period, it had been a onetime capital, also named “Da Li city” or “Shi City ”. Xizhou also has a long history in business, according to the “Documentation of Dali County” in the early years of the Republic of China: “as for commercial mind, Xizhou people are the best”. Along more than one thousand years of the historical river, Xizhou businessmen had even left their tracks in southeast Asia areas like “Xunchuan” and “Luoguo”.

During Guangxu years of Qing Dynasty, the internationally famous “Xizhou Trade Caravan ” was established. There were more than 300 business groups, firms and commercial ports in many places around the world, for example, early in 1920s, the four great commercial families including Yong Changxiang, Xi Qingxiang, Hong Xingyuan and Fu Chunhe had already established businesses in Shanghai and Hongkong. Therfore, Xizhou has a title of “Minor Shanghai”.

Since Sui Dynasty, there had been thousands of scholars with official title. It was said by local people that “we have more than eighty second-grade successful candidates in the highest imperial examination, and numerous scholars at provincial and local levels”. 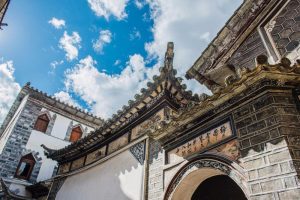 Xizhou was once a commercial center of Yunnan, and the birthplace of Bai’s modern entrepreneurs. It is said that more than 140 wealthy families built their houses here, including the Yan’s, the Yang’s, the Dong’s and the Zhao’s. These houses are characterized by ‘three rooms and a wall screening’ and ‘four joints and five courtyards’. ‘Three rooms and a wall screening’ refers that every house boasts a major room flanked by two wing-rooms, and facing the middle room erects a wall screening for the house privacy. ‘4 joints and 5 courtyards’ means the houses have a central courtyard with rooms in all directions; other smaller four courtyards join the central one from four sides to make five courtyards.

Traditional Residences of Bai popple in Xizhou Old Town pay much attention to the decorations of screens, doors, windows, walls, flower terrace, arches over gateways. The center of the screen is often inscribed with four characters, or embedded with a marble. Doors and windows are mostly made of rare wood and carved with auspicious designs. Walls are painted with white lime and decorated with wash drawings. Arches over gateways with upturned eaves are exquisitely carved with great care and precision.

Even today in Xizhou Old Town, among the traditional Bai people’s residences with blue tiles and white walls, you can still find those of Ming Dynasty, Qing Dynasty and Republic of China period. There are, in total, 15510 Bai residences, among which 151 are century-old relics. These residences have well revealed Bai people’s social history, politics, economy, culture and art. Xizhou, a place of green mountains, clear waters, gentle wind and bright moon, is a true museum of Bai society.

1.Seven Feet Study Building （七尺书楼）
Seven Feet Study Building is located in Xizhou Ancient Town Dajie Lane No.8, Dali Yunnan, where was a famous literati Yang Shiyun in Ming dynasty established around 1526 AD. The building is civil engineering structure, there are three big rooms. The rooms face to the east, all three are divided into two floors of upstairs and downstairs, doors and windows are carved with elegant design. Wealthier homes will often designate one wall to be a reflecting wall while the other three serve as living spaces (三坊一照壁). Seven Feet Study Building was repaired in Qing Qianlong years and years of the republic of China has repeatedly, but the whole building still preserved in the Ming dynasty architectural style.

Yang Shiyun did not seek fame and wealth, he thought that wealthy person who even tie myriads of strings of cash around the waist, only stayed in that seven feet grave after the death. So the posterity called the house he lived in “Seven Feet Study Building”. After Yang Shiyun died, his thereafter successively repaired it repeatedly in Qing dynasty Qianlong years and years of the republic of China. And it is very famous in Dali spots in Yunnan.

Yan Family Compound, a well preserved and partially renovated structure in the town square. The compound has been converted in a museum of Xizhou’s history and Bai architecture. This site was the original residence of Yan Zizhen, a wealthy businessman from the early 20th century, and is a pristine example of high Bai architecture.

Yang Family Compound is located in Dali attractions Yunnan – No.19 Ranyi Lane, Xizhou Ancient Town, is architecture at the early stage of the Qing dynasty. Yang Family Compound’s layout is a typical Bai courtyard building of “a reflecting wall while the other three serve as living spaces”, “quadrangle courtyard with two extra patios in the two sides”, which focuses on symmetry. In the courtyard there is reflecting wall facing east, under reflecting wall there is flower-stand with all sorts of flowers and trees in order to beautify the environment. Right in the front is main house, left and right sides is wing.

March to May is the best time to visit Xizhou Ancient Town. There are many festivals and events of Bai nationality in March to April every year, traveling during time tourists can appreciate full-bodied ethnic customs.

This amazing lake lies next to the amazing historic sites in the Dali valley and the natural scenery and good hiking trails on Cangshan Mountain. The whole region is full of interesting and beautiful sites.

The magnificent Chongsheng Temple and the well-known Three Pagodas are the symbol of Dali.

Xizhou Cake is the most famous food in Xizhou. It is made of leaven flour, knead with vegetable, and added spring onion, Chinese prickly ash, and salted for a salt taste, or ham, diced meat, pork scraps and brown sugar for a sweet taste. Toast for ten minutes and it is served.

March to May is the best time to visit Xizhou Ancient Town. There are many festivals and events of Bai nationality in March to April every year, traveling during time tourists can appreciate full-bodied ethnic customs.