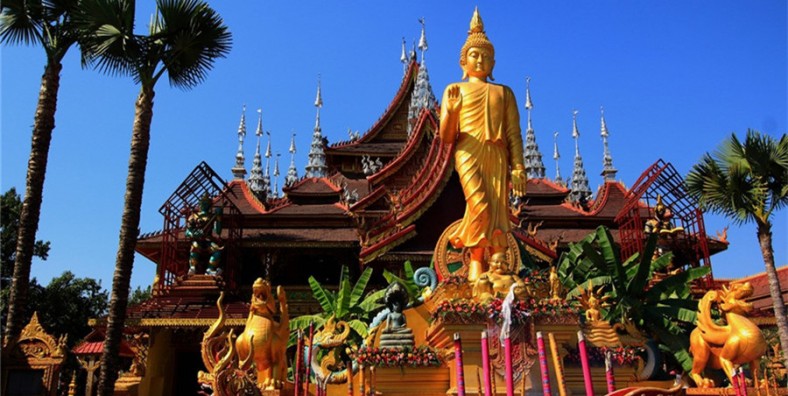 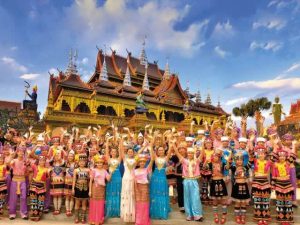 Why is Manting Park so special?

Manting Park boasts not only the unique natural scenery, but also artificial rare flowers and architecture. With the radiant and enchanting scenery, dense forest and a great variety of fruit trees, it is an ideal tourist attraction for people to go sightseeing. Manting Park is the oldest park in Jinghong with a history of over 1,300 years. Manting Park is the carrier of Dai culture. It is the main venue to hold grand ceremonies of Dai nationality. It was listed as a national 4A scenic spot in the year of 2009.

In medieval times, it was where feudal leaders went to relax and enjoy themselves. Manting Park is also called ‘Chunhuan Park’ which means the place where people can have their soul relax and keep all the earthly cares out of minds. This name came from a legend: One day, the King of the Dai ethnic group came to visit this park with his princess. The princess then was so completely enthralled by the beauty of the sceneries here that she lost her soul and forgot anything else around her.

Manting Park, located in the southeast of Jinghong City in Yunnan Province, is about 2 kilometers (about 1.24 miles) away from the urban area of that city. It has an area of 115,400 square meters (about 28.5 acres).

How to Get to Manting Park?

Travelers can take bus No.3 to Manting Park directly, or can go to there by taxi or motorbike since it is not far from the downtown.

Main Attractions and Things to Do

Some historically meaningful attractions can also been seen in the park. As soon as visitors enter it, a bronze statue comes into view. It depicts Premier Zhou Enlai, dressed in Dai costumes with a water bowl in left hand and an olive branch in right hand, who once joyfully spent the Water-Splashing Festival with the Dai people in 1961. The statue commemorates that unforgettable day.

On the left of the Zhou Enlai statue is the second historical attraction: two dodhi trees planted by the princess of Thailand symbolize the friendship between Thailand and China. 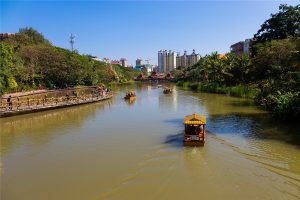 Besides, there is a Bamboo Shoots Pagoda moldered after Manfeilong White Stupa, a quadrangle pavilion, a hexagonal pavilion and a Dai-style pavilion. Within the Manting Park, Manting Village and Manlongkuang village are accessible for a visit.

Tourists can paddle on the Free Life Lake to see wild pandas, wild pigs, snakes and birds, or just watch the Dragon-boat Racing.

The major temple of Xishuangbanna -Wa ba Jie Temple(瓦叭洁), white stupa and octagonal pavilion can be seen in the Buddhist Culture Zone, where you can offer incense to Buddha, free captive animals and take a look at the Palm-leaf Scripture. The Black Forest offers you green grass, colorful blossoms and odd trees.

Now, Manting Park is a place where visitors not only enjoy the scenes but also the traditional culture of the Dai. Buildings, such as the pavilions, possess the distinguished architectural features of the Dai. In its back, there is a temple called Jiebajie in Dai language. It is the most important place for Buddhists in Xishuangbanna to worship Buddhas. Some other various kinds of entertainments are available too, for example, the peacock park where peacocks strut and the elephant park where elephants do acrobatics. As a former royal park, its natural beauty is fascinating with the hard work of the gardeners. The green trees provide visitors cool shade to have a rest. Next to the park is a traditional village of the Dai where visitors could enjoy Dai Cuisine and get to know their tradition and custom. 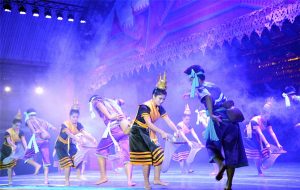 Evenings there are even more enjoyable. Every night, there is a bonfire party from 7:30 pm to 10:30 pm. During these three hours, visitors will have the chance to watch dances of the Dai, listen to people in traditional Dai costumes playing the Hu Lu Si (a kind of traditional musical instrument). In addition, several traditional activities are held every night.

Manting Park is not about architecture and plantation, which are parts of why we love it, and it’s most common to enjoy yourself in the wonderful evening party held inside the park. The Dancing Singing Fire Evening Party of the Lancang-Mekong River showcases songs and dances of eight countries along the Lancang-Mekong River, which include China, Burma, Laos, Thailand, Cambodia, Vietnam, and performances given by minority nationalities of Dai, Jinuo, Blang, Lagu, Yao and Hani. The show integrates ethnic folklores, exotic performances and interactive activities, presenting audiences a multicultural Xishuangbanna.

After the performance is finished, people will go through the Black Forest to make wish by putting the water lanterns onto the Free Life Lake. Campfire and dance just go together: every Campfire Evening Party in Manting Park has proved it. Boys and girls of different ethnic nationalities dance around the campfire. Everyone could take part in. Here the hospitality and boldness of ethnic minority is revealed fully. A fantastic evening just slips away unwittingly.