The giant prayer wheel in Shangrila is reputed as the largest one in the world for its 21 meters in height and 60 tonnes in weight. Because of its size and weight, the prayer wheel is to be spun by multiple people. It's a must-see attraction of Shangrila tour.

Recommended Visiting Time: within half an hour

Why is Giant Prayer Wheel in Shangrila So Special?

The giant prayer wheel in Shangrila is reputed as the largest one in the world for its 21 meters in height and 60 tonnes in weight. Like many prayer wheels, it contains the traditional six-syllable Om Mani Padme Hum mantra in the inside. Because of its size and weight, the prayer wheel is to be spun by multiple people. It’s a must-see attraction of Shangrila tour.

Where is Giant Prayer Wheel – Location

This giant gilt-bronze prayer wheel is located in Shangri-la County of Deqen Tibetan Autonomous Prefecture, southwest China’s Yunnan Province. At the Guishan Park of Dukezong Ancient Town, tourists have to climb up the small mountain and then can see the biggest prayer wheel in the world.

In 2002, this Giant Prayer Wheel was built in order to commemorate Zhongdian County renamed as Shangri-la County. According to the Tibetan Buddhist tradition based on the lineage texts regarding prayer wheels, spinning such a wheel will have much the same meritorious effect as orally reciting the prayers. One circle of every turn is equivalent of 1.24 million Amitabha chanting.

On the surface of the wheel shows the high relief Manjusri, Samantabhadra, Avalokitesvara and Ksitigarbha. Eight treasures of Buddhism showing on the bottom of it are Parasol, Golden Fish, Treasure Vase, Lotus, Conch, Endless knot, Victory Banner and Wheel. Inside the canister are Sutras and mantras, 1.24 million pieces of wordless mantra and all kinds of Buddhist treasures. 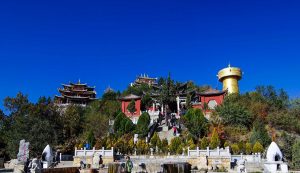 Just like the meaning of its name in Tibetan, the “Castle built on Stone”, Dukezong Ancient Town is built on the mountain foot. As one of the largest and best-preserved Tibetan residence groups in China, the 1300-year-old Dukezong Ancient Town, not only plays an important role in the Old Tea – Horse Road, but also serves as a corridor connecting Chinese and Tibetan language, people, religion and cultures.

► Respect the local custom of Tibetan.

One thought on “Giant Prayer Wheel in Shangri-La, Diqing”