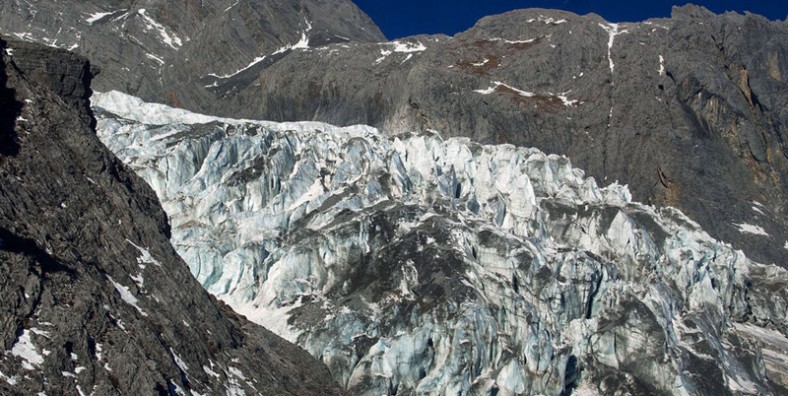 Going west for about 5 kilometers from the Snowflake Villa in the Sweet Sea Meadow, you will reach the bottom station of the snow mountain, which is the start of the Great Cable Way of the snow mountain. You will densely forest at an altitude of 3,356 meters. The cable way starts from here, ends at the top station which is at the bottom of Sanzidou(Fan) Peak, 4,506 meters above sea level. The whole cable way is 2,914 meters long, and the vertical difference in height is 1,150 meters. It is the highest passenger cable in China.

The cable way has been installed with full-sealed hanging aluminum box, which has 6 seats in it. It’s very comfortable. It only takes you half an hour to go from the immense forest at the bottom station to the expanse of white snow of the top station, but you will experience the climate of four seasons. You will be excited about the strong changes of the seasons, the big differences between hotness and coldness, and the great changes of the sceneries. 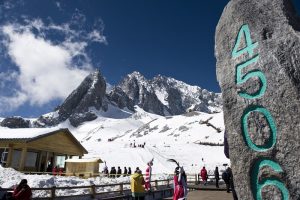 What to see in Glacier Park

There are complete vertical natural sceneries of subtropical, temperate and frigid zones, and you experience all of them in a short time. If you take open cable way, you will fully enjoy the vertical distribution of the plants in the snow mountain. Starting from the 3,000 altitude meadow, the cable would take you go through the forests of pines and firs. With the rising of the cable, the forests became gradually far away and large shrubbery appeared, and also bushes of azaleas. Reaching to the height of over 4,000 meters above sea level, you could only see some bryophytes adhered to the rocks. Then at last, large expanses of white snow would come into your eyes.

When you go out of the top station houses, you get to the Glacier Park of the Yulong Snow Mountain. Yulong Snow Mountain is a mountain with the lowest altitude and distributed with modern glacier in European and Asian Great Continent. On its east side, there are ancient glacier functioned relics from the Pleistocene Epoch, distributed in an area with a length of 15-16 kilometers from the south to the north, and a width of 4-5 kilometers from the east to the west. In such a region very close to the city, there are ancient glacier relics and a modern glacier, not large but with various kinds of types, which concentrated the major essence of middle and low altitude mountain glacier in the world. This is very rare in China. It plays a significant role in studies on glaciers, scientific investigation, protection on ecosystem and environment, and tourism.

In the waist of the Yulong Snow Mountain, there are 19 modern glaciers at the region between the altitudes of 4,000 and 4,200 meters. The total area amounts to 11.61 square kilometers. Among them 15 are on the east side while 4 are on the west. Types of the modern glacier in Yulong Snow Mountain can be divided into the following: mountain valley glacier, cirque glacier, hanging glacier and cirque valley glacier, cirque hanging glacier, from which the former ones transformed. 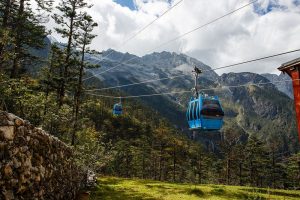 The modern glacier in Yulong Snow Mountain belongs to marine glacier, that is, temperate glacier. Despite of influenced by the climate changes in seasons, the temperature of the ice is at the melting point. The ice contains a certain amount of liquids. In the depth under the melting area, the temperature is lower than the melting point in winter, because it’s difficult for water to penetrate the ice, and the ice contains a little water. In summer, although the surface of the ice absorbs a large amount of heat, most of the takes away the heat by the ways of ice surface melting and losing the melted water. It may not necessarily help raise the temperature of the ice to the melting point by conducting and permeating the melted water. So surface cold but inner melting is the basic feature of the modern marine glacier in the Yulong Snow Mountain.

The formation of the glacier is the result of functions of the geology and weather for a long time, among which weather is the major factor to develop the modern glacier. If the temperature goes down, the snow line will drop. So the area of the mountain above the snow line increases. T his helps to accumulate large amount of ice and snow, which then impels the development of the glacier. On the contrary, if the temperature rises, the snow line will go up, the area of the mountain above the snow line decreases which forces the decline of the modern glacier. However, if there are a lot of rains, the ice and snows will increase which is benefit for the development of the glacier, and vice versa. The present snow line in Yulong Snow Mountain is at 4,800-5,000 meters high above sea level. The annual average temperature in the neighborhood is between -3.3 degrees Centigrade – 4.7 degrees Centigrade. The annual rainfall is 1,500-2,000mm. The area of the mountain above snow line is 18-8 square kilometers. So the area for accumulation of the ice and snow for the present 19 glaciers is quite small.

The modern glacier is very dangerous now. It can not afford the temperature rising caused by the influences of climate in a small range or caused by any manly factors¡£ 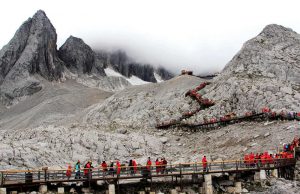 However, the global climate is becoming warmer in recent years. This is a real question can not be avoided. According to the predicts done by the UNESCO and the World Weather Organization, when the density of C02 and the gas with greenhouse effect become increased in a multiple way on the earth (it was estimated that this will be the case in the year of 2030), the annual temperature in the world will rise by 1.5 degrees centigrade – 4.5 degrees Centigrade. This is fatal harm to the modern glacier in the Yulong Snow Mountain. If it is calculated according to the local temperature decreasing rate, that is, it is decreased by 0.84 degrees Centigrade by a rising of every 100 meters, the snow line of Yulong Snow Mountain will rise by 180 -350 meters. Then, the mountain area above the snow line will drop to 2 -8 square kilometers. Even worse, it will drop to an area less than 2 square kilometers. At that time, it will be very difficult to preserve the modern glacier, and finally is will disappear from the Yulong Snow Mountain. As it’s only 25 kilometers from the snow mountain to the city, the heat effect cause by the city construction is affecting the modern glacier. The modern resources in the Yulong Snow Mountain are affected and harmed doubly by the climate changes and man-made factors, resulted in damages on the ecological environment and tourism on the Yulong Snow Mountain.

In order to protect the resources of modern glacier rationally, effectively in a long term, people should be guides by
scientific theories. The Management Committee of Yulong Snow Mountain Development and the company, co-operated with the Geology Research Institute of China at the beginning of 1997, organized glacier experts to make a site investigation and a complete assessment on the protection and development of the modern glacier, forming a series of systematic reports on the topics of “assessment on resources environment, developing and planning on the glacier, protection on the resources of glacier”.. According to the proof provided by some related experts, the way of increasing local rainfall can help to adjust the influences of the climate on the glacier.

The Management Committee and the Company are trying to protect the environment in the following ways:
1) Forestation in the Yulong Snow Mountain and in its neighborhood area in order to make the environment green and preserve water and soil, this also will help the local water recycling and increase the rainfall. This is what people call “Green Land Effect”; 2) Constructed man-made lakes in appropriate places in the mountain (this is a project in the developing area planning). These lakes can be better scenic spots and can help increase the rainfall in the neighborhood. This is what people called “Cold Lake Effect”. Protecting the plantation, water and soil in the area of the glacier by scientific ways, the resources of the glacier will be preserved. This is a long-term plan to protect the modern glacier in the Yulong Snow Mountain.