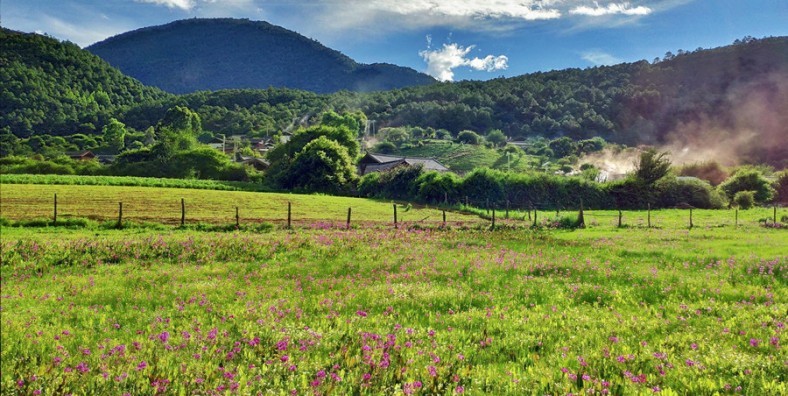 What to see in Jiuzihai Pasture 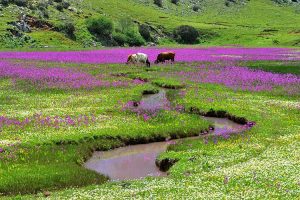 On the east side of Jade Dragon Snow Mountain, about 30 kilometers from Lijiang city, there are more than 666 acres of plateau meadow, and there are more than 30 mysterious sinkholes scattered on the huge meadow. The spring emitting from a small cave is divided into three curving and winding down, and bypassing the village suddenly until disappearing at the foot of the mountain.

More than 666 acres of plateau meadow is just like a vase, showing a picture of nature in the woods on the east side of Jade Dragon Snow Mountain. More than 30 sinkholes are inlaid in the meadows like the shining stars. Because of the mysterious and natural worship of the villagers, local people use “Jiuzihai” as the village name. Jiuzihai is evolved from a beautiful sea. There is a mysterious mountain spring in the land and mysteriously disappears after the meadow.

What attracts tourists most is fresh and beautiful flower sea. These flowers have many varieties. The flowers are white this month, and turns yellow next month. What’s more, some of them change several colors of the season. Several generations in the village felt strange about the various phenomena in this dam, but no one has ever explained these mysterious natural phenomena. Every flower seems to be carefully carved. Here a highlight of the sea is primroses colored with dreamy purple, pink and tender yellow evenly decorating on the green grassland. Their beauty is natural, pure, and all elements are god’s masterpiece, while nature is the best designer.

There are more than 30 circular pools distributed without rules in the meadow of Jiuzihai. Looked from distance, it is a strange “crop circles”. but it looks more artificial closely. The most amazing part is that most of the round water pools running by a unique tree. There is a large amount of water in the pool except winter, and the water depth is more than one meter. Standing on the slope of Jiuhaizi village, the whole meadow looks like a lot of silver mirrors, flashing in the sea of flowers and meadows.

The Baisha Ancient Village is one of the oldest towns in Lijiang City. It got its name “Baisha” meaning “white sand” from the natural white sand in the area. It was the cradle-land of the Tusi Dynasty evolved from the Mu Clan. It was also the earliest settlement of the Naxi people. There are many ancient constructions built in the Ming Dynasty: the Dabaoji Palace, the Liuli Temple and the Wenchang Palace. The well-known Baisha Frescoes are situated in the Dabaoji Palace.

Yushuizhai is under the foot of the Yulong Snow Mountain, facing the ancient city of Lijiang, which is o­nly 15 kilometers from the city. The sacred water out of the Yushui Village brings up a generation after generation, giving them courage, wisdom and happiness.

A trekking route leads to the amazing Dongba Valley. It is located at the foot of Jade Dragon Snow Mountain and 15 kilometers away from Lijiang Old Town. The Dongba Valley is home and livelihood of Naxi people. Traditional houses of Naxi and other peoples are open to visit.

Attraction Transportation:Because there is no public bus, tourists need to charter a taxi / car/ mini-van or carpool together from the downtown area. The distance is around 10 miles (15 kilometers). It takes around 40 minutes. The round-trip charter rate is around CNY 200. 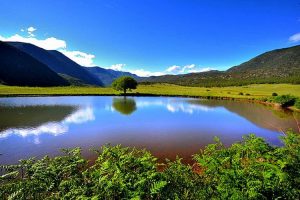 1 Find out right away what feed supplements you are going to need for winter. Get help to do a proper feed budget.

2 If you don’t have enough feed, get rid of stock now.

3 If you have to buy silage or hay, open a sample bale to inspect its fermentation and freedom from weeds and moulds.

4 If you are offered ‘baleage’, check it closely as it may have been hay that was baled when slightly wet so it could be mouldy.

5 Don’t rely on nitrogen fertiliser to grow all the extra feed you need. Response to N depends on moisture levels and soil temperatures so it’s not a guarantee.

6 Be aware of the impact N fertiliser has on the environment and take care to keep it away from waterways when spreading.

7 Make sure stock clean up hay or silage fed out to them. Feed racks, which can be moved, will avoid pugging and pasture burning from silage bales dumped in one place.

9 Do a soil test if there hasn’t been one done for over a year.

10 If weeds were bad last year, find out how to fix them for next season.

11 Plant some willows and poplars to feed in future droughts.