Let there be flowers everywhere 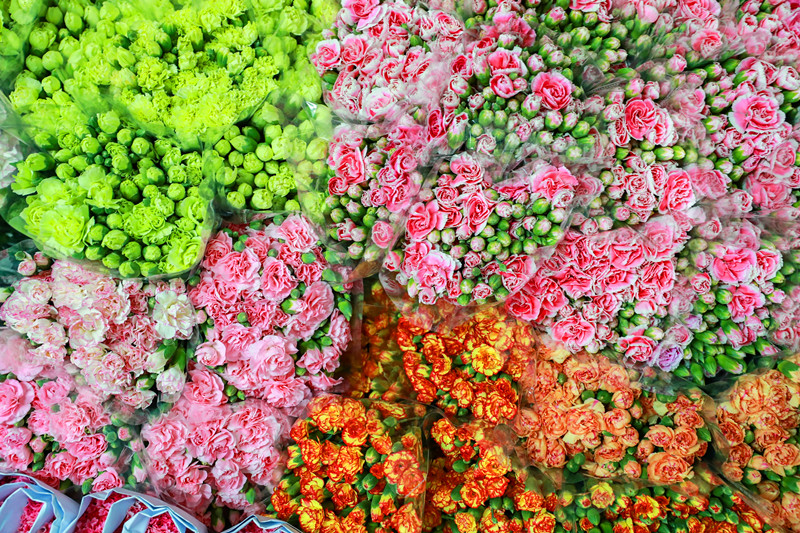 Yunnan, sitting on the southwest border of China, is well-known for its mild and pleasant climate across the whole province. Long duration of sunshine and sufficient heat being ensured here provide an ideal environment for the growing of flowers nearly all year round. Flowers have made Yunnan a more beautiful place. They are a major attraction for tourists, and more importantly, the flower industry has become a strong impetus for the province’s economic growth, particularly in the fields of export and poverty alleviation.

In Yunnan, flowers of innumerable kinds, shapes and colors often play as a single and independent source of attraction which brings hundreds of thousands of visitors from both home and abroad to this land each year. This is certainly something hard to be found elsewhere. 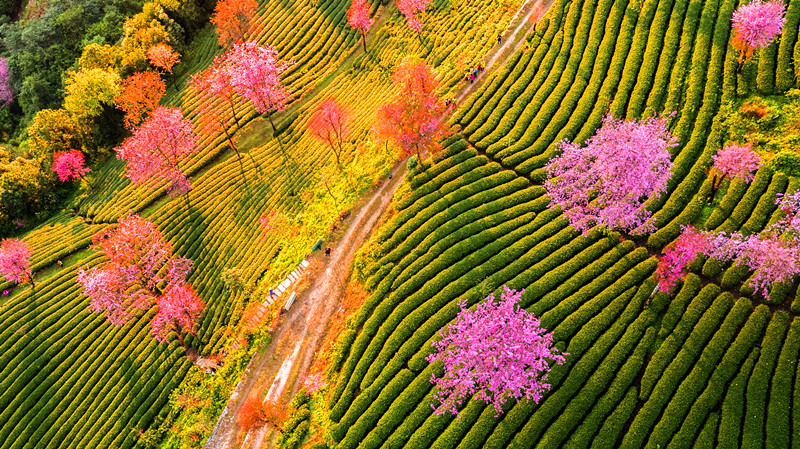 Take Luoping in northeast Yunnan’s Qujing city for instance, one after another groups of tourists would be seen flooding into its countryside between February and April to view the magnificent golden ocean of canola flowers scattering across the karst hills typical in this area. These bright yellow flowers start to glitter in the sunlight every day around 9 a.m. when the morning mist utterly disappears. Tourists can verily spend a whole day here, immersing themselves in this paradise of flowers and appreciating the blossom of rapeseeds. And later – after sunset – an alluring and somehow elusive picture of night would be unveiled, just like what appears in Van Gogh’s masterpieces.

While the florescence of canola flowers is about the end in late March, pear blossoms have already been enjoyed and celebrated on the Wanxichong Pear Blossom Festival that is held in Chenggong, Kunming, annually. This is definitely an ideal weekend destination for all citizens, as every white and crystal-like petal hanging in the tree is allowed to be appreciated from an incredibly close range. “I’m surprised that I can find such a beautiful place not far Kunming. And it is a great change get close to the nature,” said Yang Yang, a citizen of Kunming, while taking photos with his smart phone. 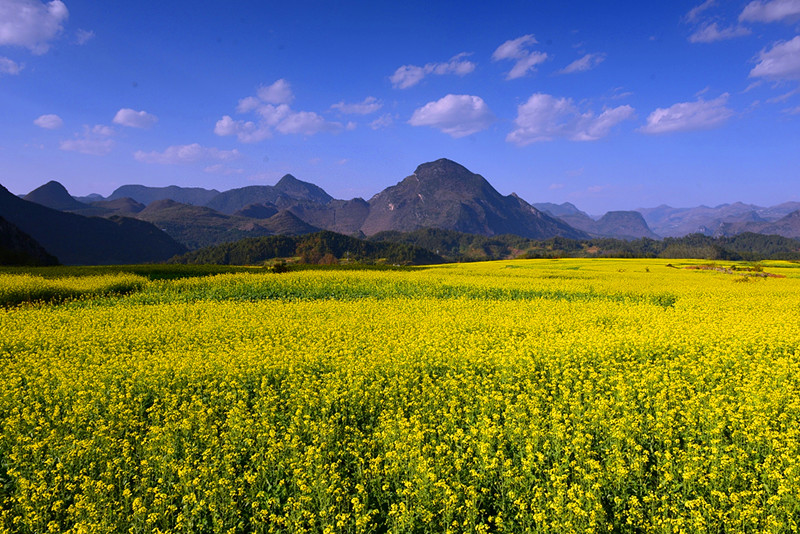 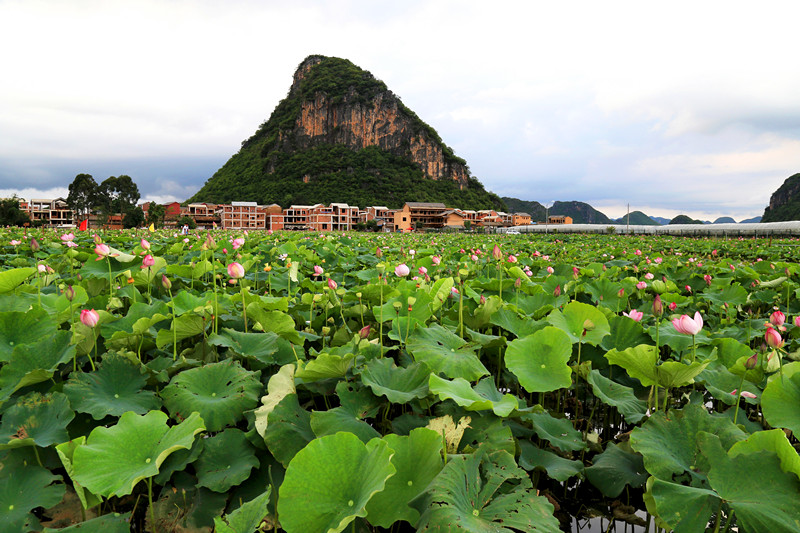 The best thing you can ever think of doing when summer comes is perhaps to go south, because this is the right time to see myriad green lotus leaves floating on the water at the Puzhehei National Wetland Park in southeast Yunnan’s Wenshan city. Standing among these giant leaves, you would be truly overwhelmed by their refreshing scent pervading in the air. And the greenness that surrounds you is indeed the most desired gift on any stuffy and wearing summer day.

And finally in December – when most of the country has been covered by ice and snow – thousands of oriental cherries in Nanjian county, the Dali autonomous prefecture of the Bai ethnic minority, are still in bloom notwithstanding the strong and freezing north wind. These tiny pink flowers look so adorable that no one can keep their eyes away from them. Wang Shaoji, the head of county, said: “Flower tourism has brought us with brand-new opportunities of development, and now we hope to achieve the goals of rural revitalization and poverty alleviation as soon as we can.”

Apart from the economic realm, flowers have also been seen in a number of ceremonies and festivals across the province. In fact, many ethnic minorities in Yunnan, such the Yi, Bai and Miao, have traditions to celebrate their own flower-related festivals or events . Thus tourists who come to Yunnan are able to enjoy a great variety of blooming flowers while having a taste of its unique ethnic cultures.

In the past a few decades, Yunnan has dedicated itself to the development of flower industry. Flower and flower-related businesses, undoubtedly, are becoming new propellers of the province’s economic growth. Vital changes have been observed no merely around flower cultivation and selling, but in the fields of agro-tourism and poverty alleviation. It can be said without much exaggeration that flowers are helping Yunnan turn into a land with enormous prosperity. 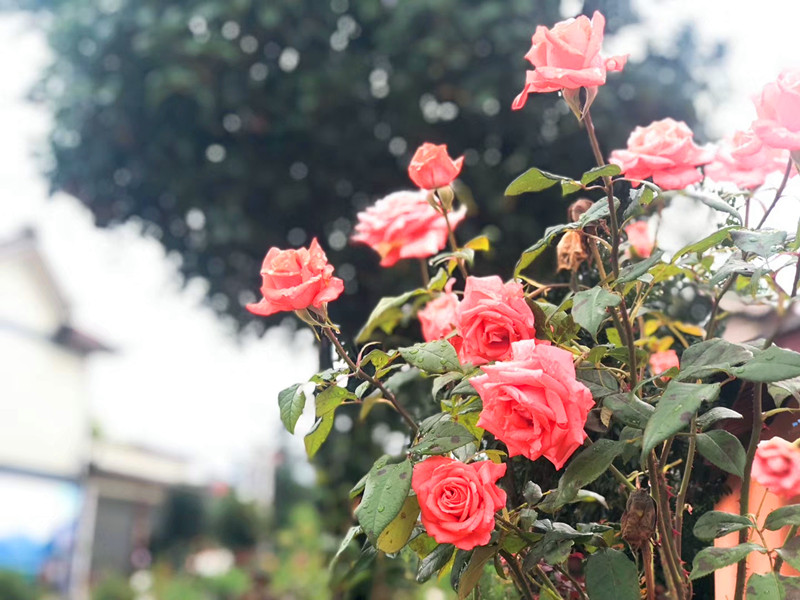 Setting off from the Linxiang district of Lincang, a tremendous ocean of flowers would appear on the horizon after some half an hour’s drive. Lavenders and prince’s feathers can be seen swaying gently in the wind with rhythms. What stand on the slope behind the flower fields are several folk houses with red roof tiles and white walls. It is called Tenglong village.

Before, the villagers here had no choice but to depend on the growing of several traditional crops. Their sources of revenue, therefore, were very much limited. Yet since flowers were widely cultivated and agro-tourism was introduced, the income of local residents in Tenglong has increased substantially. More recently, a new business model – which integrates private enterprises, local agricultural cooperatives and individual farmers together – has created new chances for the further development of flower industry. Accesses to land and technologies needed are guaranteed to every flower grower in the village, and many residents find new jobs in newly-emerged service sectors, such as agro-tourism and agritainment. Flower industry has indeed ameliorated the villagers’ livelihood in Tenglong.

“Our village has been entirely changed after the development of tourist industry. My family, for example, recently moved into a new house and bought two motorcycles. And our household income can get higher than 70,000 yuan per year now,” said Tie Shibao, smiling and laughing. “We know that all these changes have to do with flowers, it is these beautiful flowers that make us richer and happier!” 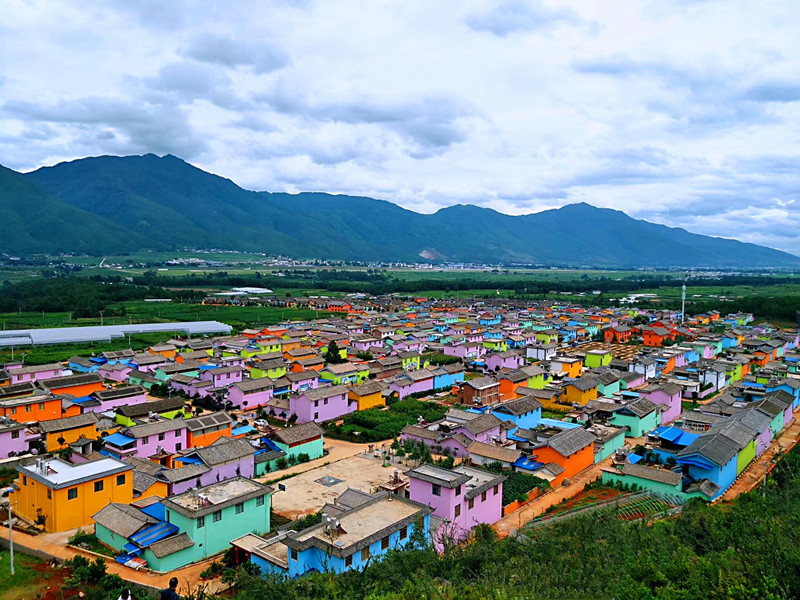 Changes also happen in Lijiang, one of Yunnan’s most popular tourist destinations. In 2017, a recreational town themed love and roses was built up near Jinlong village, Lijiang city. It is the first town of this kind in whole Asia. However, Jinlong used to be a place where the locals had to constantly struggle with poverty.

“I worried about this project at first, and thought it might not benefit our life at all,” said Zhao Jiping, a resident of Jinlong. “But soon I changed my mind, because after it was open to the public, I saw thousands of tourists flooding the street of the town, and the hostel I run with relatives could bring over 10,000 yuan to my family every month.”

Now, the town is encouraging growers to gain additional values out of the flowers they grow. A number of flower-based products have already been developed, such cake, facial mask and essential oil.

Dounan: from local to global

When a day closes and every office worker heads back home, there is a place in Kunming lit up overnight. That’s the Dounan Flower Market – the largest floral marketplace in Asia. Staff here concentrate on sorting, trimming and packaging fresh flowers and make sure that these bundles would appear on the shelves of flowers stores in Thailand, Vietnam, Laos and many more countries every single day. 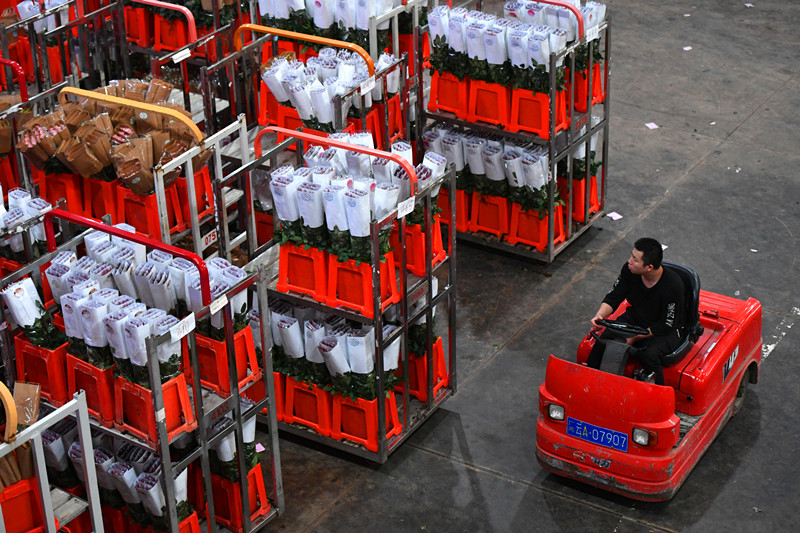 According to statistics, there are about 8 to 10 million flowers kicking off their journey from Dounnan and being shipped to over 50 countries and regions on the globe each day. The prevalence of flower business has attracted a large number of wholesalers to come and work in Kunming. Yuan Fuwang, for example, would send tons of fresh flowers to her wife in Laos per week. “Around 80% of flowers available in Laos are actually from Dounan. Red roses and carnations are the most popular ones there,” said Yuan.

Dounan is a rather tiny dot on the east bank of Dianchi Lake, if you attempt to find it on Google Map. However, it is a legendary place where almost the entire flower business of China is centered. What has been formed in Dounan is a comprehensive modern production chain of flowers which comprises cultivation, storage, logistic services and production development. Its Network of selling has covered all South and Southeast Asian countries and parts of Europe, including Russia and Ukraine. 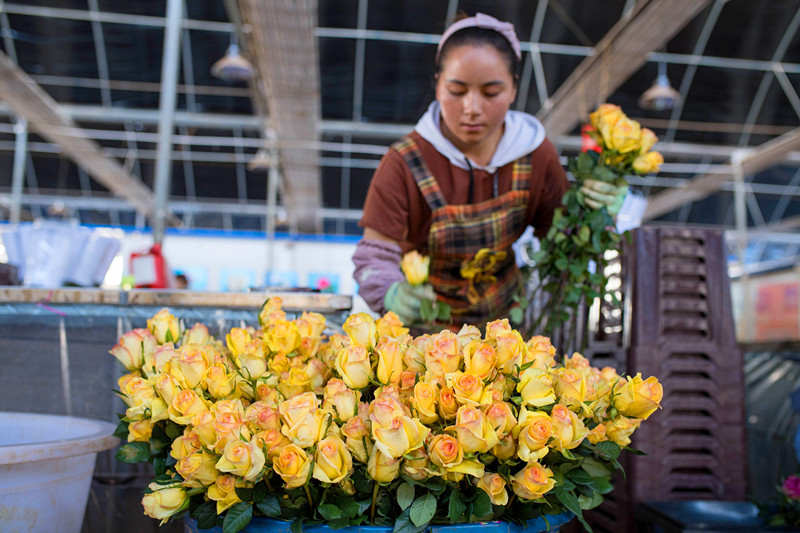 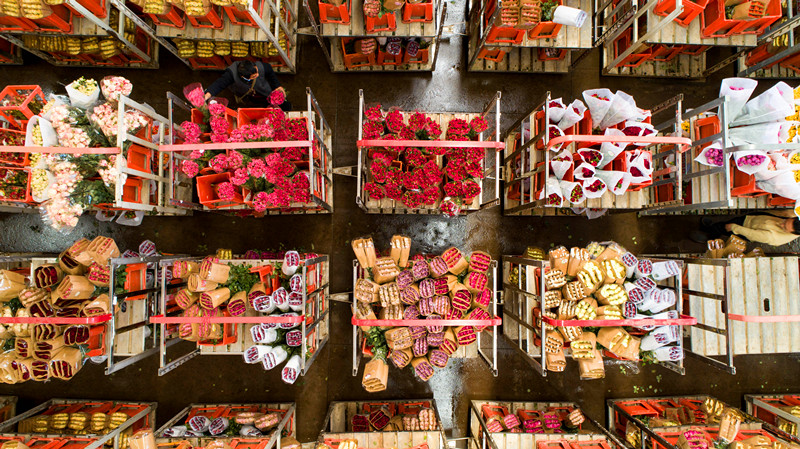 In 2018, Yunnan’s area for flower cultivation reached 1.7 million mu (equivalent to 113 thousand hectares), with an overall output value of 52.6 billion yuan. Yunnan has been the largest flower producer in China for the past 25 consecutive years, and the Dounan Flower Market could sale as many as 8.5 billion fresh flowers annually. These figures vividly demonstrate the boom of flower industry in Yunnan over decades.

It is fair to say that flower is now the synonym of Yunnan. Thanks to the Belt and Road Initiative, the cooperation between Yunnan and its neighboring countries have been further enhanced these years. Yunnan’s flowers have also gone from local to regional, and then global.

“Let there be flowers everywhere.”This must be an essential part of Yunnan dream – if there is any.