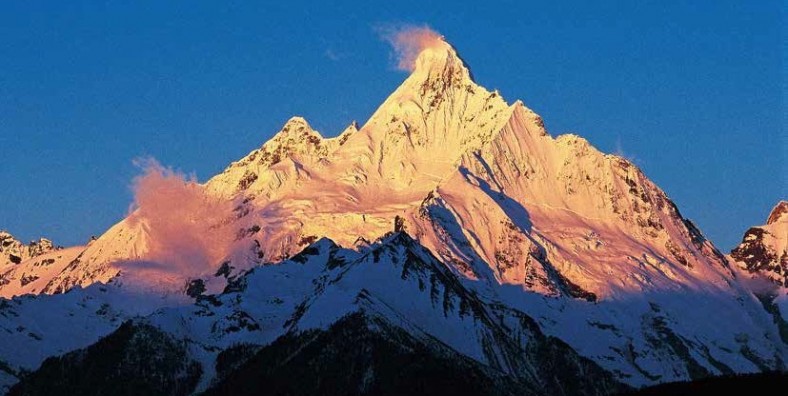 Why is Miancimu Peak So Special?

Miancimu Peak is one of the peaks of the Meili Snow Mountain. There are always clouds in the snow-covered Miancimu Peak. Every year, a lot of tourists come here to enjoy beautiful snow scene.

Miancimu Peak is located 10 kilometers northeast of Deqin County, Yunnan Province. It is one of peaks of the Meili Snow Mountain, close to the Kawakarpo Peak.

How to Get to Miancimu Peak?

What to See at Miancimu Peak?

Sunrise/Sunset: The golden sunrise on the dramatic snow-capped Miancimu Peak is a must-see for most tourists who want to admire the spectacular scenery of this mountain.

Glaciers: There are four big glaciers  next to Miancimu Peak of Meili Snow Mountain: Mingyong, Sinong, Niuba and Nongsong. The longest and the largest glacier is the Mingyong Glacier.

The ideal seasons to visit Miancimu Peak are in the winter and spring periods between October and May. The best season is after the end of October, when you can view the main peak because of the nice weather, clean air and the high transparency there.

However, in other seasons, to see the main peak you have to depend on your luck. You are more likely to have a chance to see the snow-covered mountain in the early morning when the sun has just come out.

In order to meet the golden sunrise of Miancimu Peak of Meili Snow Mountain, it’s highly recommended to stay here for one night. There are many guesthouses and hostels around Feilai Temple, most with viewing decks for tourists to enjoy the spectacular scenery of the sun shining over the snow mountains.

► Check with the hotel or guesthouse whether there is water for shower before checking in it for its lack of water in this area.

► It is difficult to see the mountain in its entirety during summer and autumn, due to heavy cloud cover or mists.

►The ultraviolet rays are strong and you may need to bring something anti-sunburn.