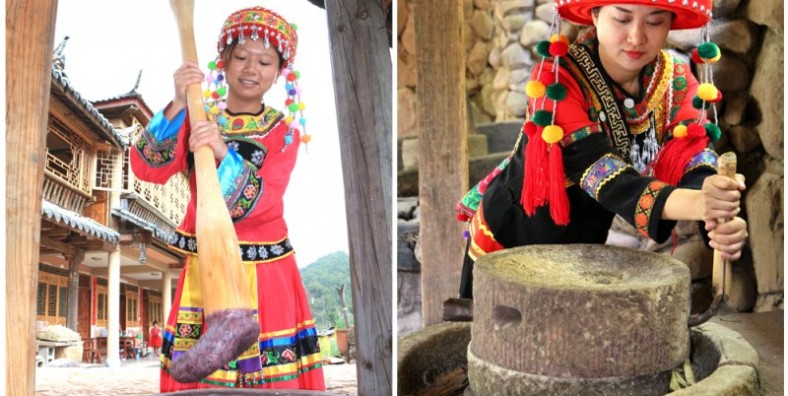 Located 16 km south from the County seat of Ning’er or 25 km from Simao District, Nakeli used to be an important station on the Ancient Tea-Horse Road. It is also the birthplace of the famous Love Song of the Caravan once played on China Central Television.

Composed of 66 peasant families, Nakeli village is located by rivers and near mountains. With superb geo environment, the village has well preserved vestiges of the Ancient Tea-Horse Road including caravansary, lanterns and stone troughs etc. Many adventurers from USA, Japan and Hong Kong etc have visited the village for many times.

Nakeli was originally called Makuli which means “horses cry”. It is said that no matter the caravan from Kongqueping of Mohei Town or from Simao continue their journey along the Ancient Tea-Horse Road, they had to cross the river in front of Nakeli where they spent night in the Rongfa Caravansary; and when crossing the cold river, the quite exhausted horses even cried. So in order to well protect the horses, which played an important role in the caravan, caravan leaders petitioned the government which afterwards constructed a 20-metre-long lounge bridge. Since then, Makuli was renamed Nakeli. 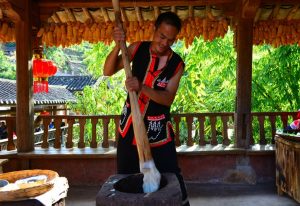 Since the Tang Dynasty, Ning’er had been a gathering places of caravans and businessmen due to its high production of Puerh tea and Mohei salt. The extension of the Ancient Tea-Horse Road boosted the prosperity of the tea industry, and caravans naturally became the world famous carrier of Puerh tea. The landscapes, folk customs, and cultural differences have made the Ancient Tea-Horse Road a golden tour route in China, and Nakeli is a highlight on the route.

In recent years, under the guidelines of Chinese Communist Party to enrich people, locals in Nakeli relying on the geographical location and rich resources spare no efforts to develop the catering industry which features eco delicacies such as Tofu soup and peanut soup etc, offering the urban dwellers a nice place for leisure and entertainment.

Four villages in Yunnan province made it onto the list of the Most Beautiful Chinese Villages for Leisure, recently released by the Ministry of Agriculture.

Another six landscapes in Yunnan were honored as Beautiful Pastoral Landscapes in China, namely the canola flower field landscape in Tengchong County, Jiancao paddy field in Yunlong County, Hani terrace field in Yuanyang County, Hekai ancient tea garden in Menghai County, Dahai grassland in Huize County, and grape landscape in Mile City.
A total of 100 villages and 140 landscapes were included in the list.