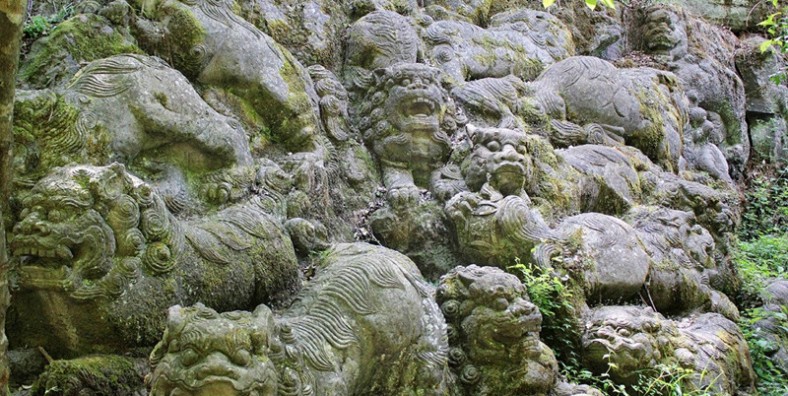 The One Thousand Lions Mountain which is the literal translation of its Chinese name, Qianshi Shan (千狮山), is a lesser-known tourist attraction near Shaxi (沙溪), in Yunnan province. This mountain situated behind the old town of Jianchuan (剑川) features hundreds of lions statues and lions carved directly in the stone.
Chinese Name:剑川满贤林千狮山
English Name: Qianshi Moutain /The One Thousand Lions Mountain

In spite of the massive stone gate that marks the entrance shows that the local government has hoped for the crowds of tourist that travels between Lijiang and Dali to come to Qianshi Shan. It seems however that travellers still prefer to go hiking on the nearby Stone Treasure Mountain or Mount Shibao (石宝山) or in the famous Tiger-Leaping Gorges (虎跳峡) near Lijiang.

Readers who have already climbed a Chinese mountain that has become a tourist attraction are familiar with endless flights of steep stone stairs. Like Mount Weibao (巍宝山), Mount Shibao (石宝山), to name just two in Yunnan, or the famous Mount Tai or Taishan (泰山) in Shandong province, hiking Qianshi Shan first involves climbing the 999 steps of the ‘Qiantai Slope’ (千台坡). Since the number 999 is associated with longevity (长寿), it is believed that once you’ll reach the top, you’ll have extended your life span. There is a similar belief that those who climb the Taishan will live one hundred year.

The massive stone archway or paifang (牌坊) at the top of the Qiantai slope shows that the local government has invested a lot of money to attract tourists, but at the moment, it’s the rendez-vous of locals who come for a short hike and pray in one of the temples hidden in the valley.

One Thousand Lions and Xu Xiake 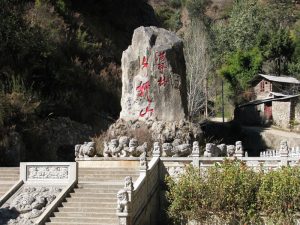 There was something other-worldly about walking through the forest on a trail lined with dozens of lions statues of all sizes and adopting various postures. They were definitely not the guardians lions that as foreign travellers we are used to see at the entrance of banks or officials buildings in the Chinese world. Most of the lions had a large smile on their face and somehow reminded me of the cast of strange characters we find in Hayao Miyazaki’s Spirited Away.

On the picture above, you notice that some hikers have put wood sticks under the belly of the lion, like if they wanted to offer him support in his long pose. Locals believe that, by doing so, the lion will also alleviate hikers’ fatigue.

Some of the statues do not look like they have been affected by time, but many are covered in a green moss. How long have these lions been there?

Historical and cultural information about Mount Qianshi, how and why it came to be are scarce. The few things I know, I read them from a stele I stumbled upon while hiking the trail. According to the stele (which was put there in 2003), Mount Qianshi was discovered in 1639 by the Ming’s dynasty famous explorer Xu Xiake (徐霞客) when he was surveying the source of rivers and streams in the region. The stele gives all the honour to Xu Xiake (praise him), but no information regarding the lions and how they fit into the local Bai ethnic group culture.

Temples in the forest 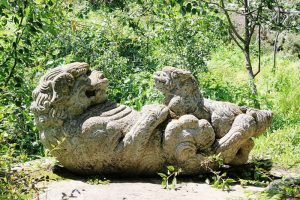 There are several cluster of interesting temples, old and new. Some are pretty far up, hidden in the forest after several flights of stairs. Most of them are still in used and local worshipper come a long way to burn incense and worship the Buddha.

My favourite temples were the ones hanging above the valley. Dedicated to the Jade Emperor and the Three Pure (whom are Taoist immortals), they seemed abandoned, but they offer a unique view on the green valley which is definitely worth the hike.

How to get there

The One-Thousand Lions Mountain, known in Chinese as Qianshi Shan (千狮山) is situated in the northwest of Jianchuan (剑川) old town in Yunnan province.

You can either warm up and walk through the old town. From the bus station, find the cobble-stone street marked by a stone archway. Turn right into Zao Street 早街 and walk until you find a small stone bridge. Cross it. You are in ‘Ximen Waijie’ 西门外街. Keep walking all the way up until you must turn right again. Pass by the Martyr Park (烈士公园) where you’ll find the remaining of an ancient theatre stage and a few pagodas. Keep walking up on the main road.

It should take 30 to 45 min to walk to the entrance of the park.

There is a 20 RMB entrance fee. Count at least 2 to 3 hours to visit. It’s an ideal day-trip from Shaxi (沙溪) and an interesting alternative to hiking Mount Shibao (石宝山). Since there are very few rickshaw from the entrance of Qianshi Shan, you’ll also have the chance to see the old town of Jianchuan (剑川), which is also worth a couple of hours.