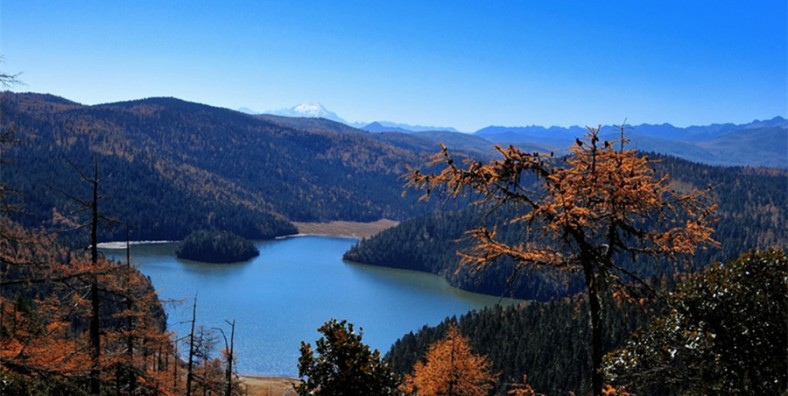 Bita Lake is a plateau lake in Shangri-La County, Yunnan Province, southwest of China. The lake is located in Pudacuo National Park and has a total area of about 1.4 square kilometers, with an elevation of 3539 m. It is regarded as a pearl of the Plateau, the most charming view is the tower-like hill and this clear, peaceful water.

Why is Bitahai Lake So Special

Bitahai Nature Reserve, covering an area of 840 square kilometers, is 3,538 m above sea level, 3km long and 1km wide; it is the highest lake in Yunnan Province. The lake there is known as the pearl of Yunnan. It is like a mirror, the water is clear, and the sun is always shining. The plant life here is rich in variety due to its subtropical climate and a wide array of wildlife living here such as leopards, black-necked cranes, rhesus monkeys, etc.

Where is Bitahai Lake – Location

Bitahai Lake lies in the east of Shangri-La County of Diqing Tibetan Autonomous Prefecture, which is one of the core spots in Pudacuo National Park with an altitude over 3500 meters above sea level.

Legend has it that a woman from the sky broke her mirror into pieces during her combing. They fell to the ground and became various lakes in the world, while the Bitahai Lake is one of the most beautiful pieces with emeralds.

There is another legend that it’s the “poison lake” mentioned in the Epic of King Gesar. When the Jiang& Ling Battle fighting to Bitahai Lake, the soilders of Ling State were strayed into the lake and drown due to the snow and ice making the lake hazy. Jiang State thought it was the result of the protection of the god of Bita mountain, so he built a temple on the hill.

Others says the insland was a summer resort for the Naxi emperor of the Ming dynasty, while others say it was a temple built by treasure hunters…

“Bita” in Tibetan means a place with a dense oak forest and “Bitahai” means a quiet lake. Bitahai Nature Reserve became an established nature reserve in 1984, and was established to protect the rare wildlife, and plant life in the region. A few of the plant types here include coniferous trees, broad leaf trees, shrubs and marshy grassland; a wide array of wildlife including leopards, black-necked cranes, as well as different types of fish such as the local three-lipped fish. This fish is said to have a history of 2,500,000 years, supposedly left over from the Quaternary Glacier- the latest great glaciers. 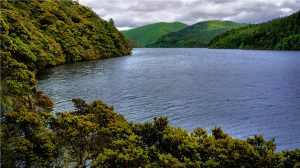 The lake is like a mirror, the water is clear, and the sun is always shining. In the morning, the water is as black as ink. At noon, it is as green as jade. In the evening, the water and the sky merge into a dazzling light. The most breathtaking view of the lake is in the moonlight. In the midnight, a bright full moon appeared over the eastern mountains and treetops.

An Islet in the Center of Bitahai Lake

In the middle of the lake stands an island, shaped like a boat sailing on the water. The island is 30 meters above sea level and is covered with rare plants, as well as spruce and azalea. Here the birds are chirping and the flowers are sweetly fragrant. When you step on the island, you feel like you’re in a paradise. 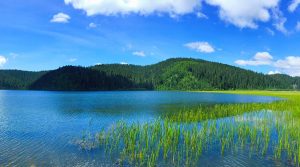 When the flowers bloom, the air is filled with a wonderful fragrance that will refresh you. In May the azaleas bloom, and decorate the forest, and in autumn they fall into the lake and leave a gift for everyone to see, because the flowers have a slight bit of poison in them when the fish eat them they all go belly up for a bit and float on the lake, kind of looks like they’re drunk or unconscious, and the birds are the only thing you’ll hear besides the running of the water. No one screaming, no car horns, nothing but peace and tranquility.

Plants and Animals around Bitahai Lake

Bitahai Lake is rich in wild animals and plants. The vegetation is characterized by abies -fabri and spruce. Among the rare animals and birds, black -necked cranes are Class-A species under state protection. The Bitahai Lake has abundant fish resources. The local three-lipped fish is said to have a history of 2,500,000 years, supposedly left over from the Quaternary Glacier- the latest great glaciers.

There are two ways to appreciate Bita Lake including plank road trekking and lake boating. The plank road is 4.5km and trekking is the best way to way to appreciate the lake scenery. Boat cruise on the lake can save your energy and the fare is RMB 50/ person. 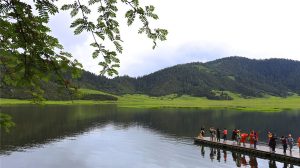 Bitahai Lake is suitable for traveling all the year around. Different season has different scenery. While Spring and autumn are the best time to visit. In spring, the hills are covered with colorful azalea, and in autumn it has a colorful scene.

It’s recomended to wear clothes when traveling to Bitahai Lake during winter seasons. Please check weather forecast of Shangri-La and prepare warm clothes before you come.

Shudu Lake as one of the biggest lakes in Diqing Tibetan Autonomous Prefecture is 3,705 meters above the sea level. Covering an area of 15 square kilometers, the lake is renowned for its stunning natural sceneries especially in every spring and summer. Visitors here can hear the sound of flute, see herds of yak and goat grazing beside the lake.

The area between the Bita Lake and Shudu Lake is the Militang Pasture which is the largest pastureland in Pudacuo National Park. Militang Pasture is dotted with yaks and cabbage-like grass. The term Militang in Tibetan refers to “the Buddha’s eye” because of its eye-shaped appearance from a bird’s view angle.

►Temperature in Bitahai Lake is lower than that in Shangri-La city and weather changes a lot, so bring some warm clothes whenever you visit.

►The best site for sightseeing and photographing Bita Lake is on the sightseeing platform after going over a mountain range on the way to Bita Lake.