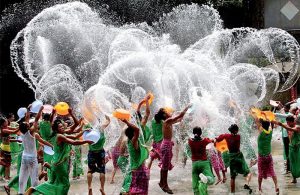 Water-Splashing Festival (泼水节)is also called Bath Buddha Festival(浴佛节). It is called Sangkanbimai/桑堪比迈(meaning New Year) in Dai ethnic language.  Dai  and  Jingpo ethnic groeps  also call this festival Shanghan and Shangjian . Both names are derived from Sanskrit, meaning turnover, change and transfer, indicating that the new year is coming. Achang (阿昌族), De’ang(德昂族), Bulang(布朗族), Wa(佤族) and other ethnic groups celebrated this festival. Cambodia(柬埔寨), Thailand(泰国), Myanmar(缅甸), Laos (老挝)and other countries also have Water-Splashing Festivals. Water-splashing Festival is usually held in middle of the six month of the Dai ethnic calendar (about ten days before and after the Tomb-sweeping Festival of the lunar calendar), which is one of the most solemn traditional festivals in Xishuangbanna. Its content includes folk activities, artistic performances, economic and trade exchanges and other categories.

Seven good-hearted fairies used their hair to make bows to kill their father, the evil God Pangmadiendalazha(捧玛点搭拉乍). When the head of a ferocious God landed on the earth, a fire broke out. In order to avoid the human disaster, seven girls took turns holding the head until it rotted, splashing water to remove the foul odor during the rotation. To commemorate their feats, the Dai people poured water on the occasion of the New Year to celebrate and express their wishes.

On the first day of theWater Splashing Festival is called Wanmo(宛墨) in Dai language . It is similar to the lunar New Year’s Eve, when families clean up, buy new year’s goods and prepare to send the old and welcome the new.The next day is called Wannao(宛恼), which means empty day. Folk people call it the day when the head of evil god rots. The main activity is splashing water.The third day is called Wan Pa Ya Wan Ma(宛帕雅宛玛), which means the day when the King comes. The activities will be held such as piling up sand(堆沙), bathing Buddha(浴佛), splashing blessed water(滴福水), lifting ascension(放高升), visiting friends(拜年), splashing water (泼水)and so on , mainly with saluting New Year and splashing water carnival.

Swinging(赶摆) is one of the major events of the Water Sprinkling Festival. The playground is usually located in the middle of a river bank or a dam, with elevated elevators beside the playground. It has a special place for sparks and flying lights. People of all nationalities dressed in festival attire gather here from all directions, with a sea of people and a noisy sky of gongs and drums. People listen to Zhang Ha’s singing(章哈演唱), watch folk artists perform peacock dance(孔雀舞), elephant foot drum dance(象脚鼓舞), butterfly dance(蝴蝶舞), white elephant dance(白象舞), wapiti dance(马鹿舞), knife dance(刀舞), boxing dance(拳舞) and so on, and dance with the rhythm of drum point Yilahui dance(依拉咴). With the dragon boat racing on the river, rising in the air,young men and women gather to throw bags and pass on friendship. At night, people continue to sing and dance carnival, lifting, setting off sparks and flying lights, extraordinary liveliness.