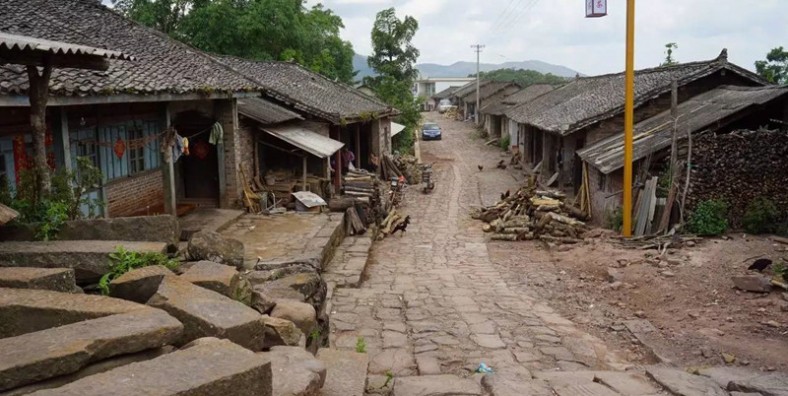 Yibang Old Town（倚邦古镇）which is one of the six famous ancient tea mountains in Yunnan is located in Xiangming Town（象明乡），the north of Mengla County（勐腊县），Xishuangbanna Dai Autonomous Prefecture. It is an important and famous Puer tea town and was also the prime place for tribute tea procurement in Qing Dynasty. Mansong tea（曼松茶）， the raw material of Jingua tribute tea（金瓜贡茶）with over 200-year-history,  is known as the best tea in Yibang Old Town（倚邦古镇） while the truth is that the Puer tea will be more fragrant with longer history.

The history of Yibang Old Town is difficult to examine in detail, however, it is certain that why the earliest people migrated to this remote mountain forest to settle down is closely related to the abundant tea tree resources here. As a conclusion, we know that there was tea first, and then there was the people and tea culture. Hence, Yibang Old Town gradually became the hub of the tea. A cluster of merchants gather together, making this town a thriving place in population and business. It can be said that the town is born of tea. 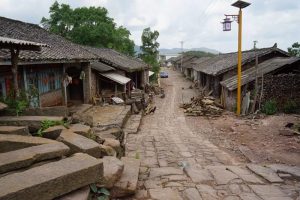 At the end of the Qing dynasty, the Puer tea production and trade center of the six famous tea mountains moved gradually to Yiwu Ancient Town（易武古镇）as the society was unrest, the banditry was rampant, the mainland merchants were afraid to trade in mountains, and the rise and development of the Yiwu ancient tea mountain. After 1912, Puer tea in Yibang Tea Mountain reappear the gradual recovery momentum in production and marketing. In 1942, Jinuo nationality and Yao ethnic groups revolted against Yibang ancient town, which turned the ancient town into a ruin.

In the historical record, Yibang, the street market on the top of the hill, was only a relaxation spot for the peddlers purchasing Puer tea here at first. The horse caravan has to stop here to relax and get supply, so it is also the starting point for the Ancient Tea-horse Road. Because of the rapid development of the tea, Yibang Old Town once grew to a famous tea distributing center besides Puer（普洱）, Simao（思茅）.

Several trade routes centered on Yibang Old Town of reliance radiating into the surrounding areas, lead to the mainland or the neighboring countries such as Vietnam, Laos, Thailand, Myanmar and other Southeast Asian countries. Year after year, the horse caravan overcame countless unbelievable hardships and created an ancient road, the Ancient Tea-house Road which carries the historic and profound economy and culture.

It is said that Mansong tea buds（曼松茶尖） that are picked before every Tomb-sweeping Day were erected with boiling water. In addition to its unique qualities, it was designated as the special tribute tea of the emperor. So there was a folk song in the local area sings like that: “There grows rare tea on the hills of Yibang Town（倚邦镇）, which fascinates the emperor so much. The tea with good quality is on the Yibang Mountain（倚邦山）while Yiwu Town enjoys the good reputation.”

However, when we tread upon the curve and dusty the road with chuckholes in the forest to Yibang street, we can see that there is no former glory leaning on the street. What displayed in front of us are the old wrecked road, the obsolete rooms, and tranquil and peaceful street. In addition to the tread worn smooth road, it is so difficult to find out the morphology of the streets in the past days. 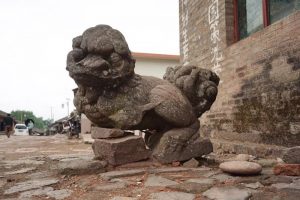 There are a considerable historical site in Yibang Old Town, especially the well-preserved tea culture and history relics.  The Ancient Tea-horse Road paved with grey and black stones stretching far away, records and manifests the extensive and profound Puer tea history and culture of the ancient tea mountains.

The main monument also contains the official tomb of local Chieftain Cao Dangzhai and his wife in Yibangzhai Village. Chieftain Cao who passed away in 1799 in Qing dynasty, was given the virtues monument（功德碑）by the imperial family in the second year of Emperor Qianlong（乾隆二年）, which records the Cao family’s feats in managing the tribute Puer tea. According to that, it’s not difficult to figure out that Qing dynasty attaches great importance to the six famous ancient tea mountains.

There still maintains three green stone tablets of Qianlong（乾隆）, Daoguang（道光） and Guangxu（光绪） period of Qing dynasty in the village committee, showing the significant tea events of that time. Visitors traveling to the tea worship hall beside the Mountain God Temple of Xinfazhai Village（新发寨）can still view the relics where the tea farmers and merchants sacrifice tea ancestor, Kongming（茶祖孔明）and the tea tree gods. Visitors can also see the prosperity of Puer tea in that days through the relics of the Jiangxi Temple（江西庙） in Anle Village（安乐村）, the ruins of the Sichuan Guild Hall（四川会馆）.

Take a bus from Jinghoong Bus Station（景洪汽车站）to Mengla County（勐腊县）， and then take a chartered bus or a taxi to the town.