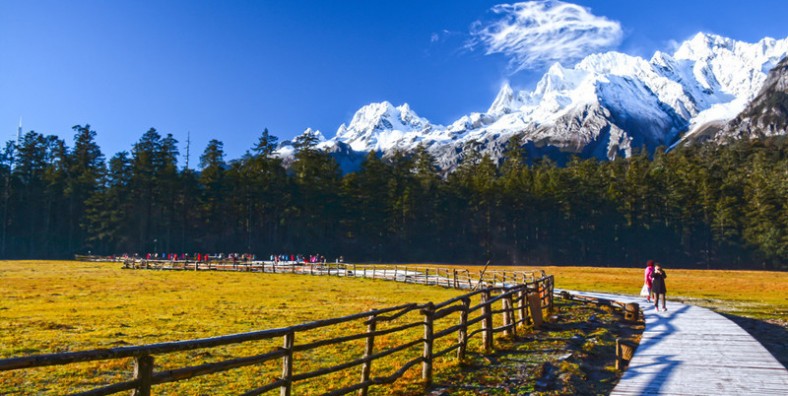 Walking through the Spruce Plank Roadway, a beautiful and large pastureland came into your eyes at the end of the primitive forests, and you are suddenly enlightened. This is the Spruce Meadow with an area of 1000 square meters.  It’s a natural grazing land in high mountains, and the second snow mountain meadow you come across.Green is everywhere, spreading its way till to the edge of the forests. Spruce forests are densely around the four sides of the meadow, looking like a skirt edged with green.

Scenery and legends of Spruce Meadow

First, view the beautiful sights. The colorful and three dimensional scenery display its beauty layer by layer from the place close to you to far away. The first layer is the meadow under your feet, which is both flat and undulated. In the summer time, green grasses are everywhere, bright mountain flowers are in full bloom. Everything turns into yellow in fall while into white in winter. The color changes in every season make you enjoy fully the beauty of the nature.

The second layer is the forest around the meadow, which has formed a natural protective screen between the snow mountain and the meadow. In your vision, it looks like a herdsman who keeps watching the meadow silently with its dignified posture.The third layer is the snow mountain, which towers into the clouds, thrilling and blowing out fog. The huge body of the mountain overlooks the meadow from the sky, just like a stern father and a compassionate mother who embraces the meadow.Second, explore the mystery.

What to see in Spruce Meadow Cable way 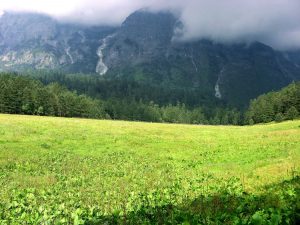 The Spruce Meadow is a pure land in the mind of the Naxi people. People can go to the “Third Kingdom of the Jade Dragon”—an ideal state in the legendary of Naxi via this meadow. According to the Dongba scripture, in the “Third Kingdom of the Jade Dragon”, “there were more silks and satins than you can wear, more fresh fruits than youcan eat, more wines and milk than you can drink, more gold and silver than you can spend. Here red spotted tigers take the place of saddle horses; white deer serve as farm cattle; foxes with big ears are used as hunting dogs; and golden pheasants with colorful tails herald the break of the day.”

In the past, the beautiful and miracle “the Third Kingdom of the Jade Dragon” attracted many Naxi young men and young women. They came to the meadow and killed themselves for love if their marriage met with obstruction from the society. They thought that the Spruce Meadow was an ideal place to go to “the Third Kingdom of the Jade Dragon”. If they died here, they would extricate themselves from the worries and go up to the ideal love state. So the Spruce Meadow is not only a place of romance, but a place full of sad feelings. If you walk along the edge of the meadow and the forest, you will feel sacred and tribute. 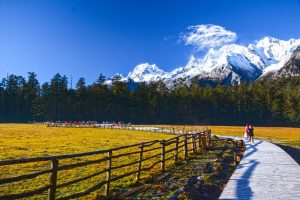 Third, appreciate the folk songs and dances. Around the Spruce Meadow, you will find some girls, dressed in bright colored costumes, sing and dance on the meadow or in the forest, adding much more beauty to the scenery. It’s better for you that you could distinguish their costumes. The girl dressed with an embroidered cape of stars and moon is Naxi. The one who wears a pan-shaped hat with colorful strings hanging down is Yi girl. You can borrow their costumes and put them on, take a picture of yourself with these costumes on. You can also join the them, dance a folk dances hand in hand with these girls. Don’t forget to express your thanks when you leave.