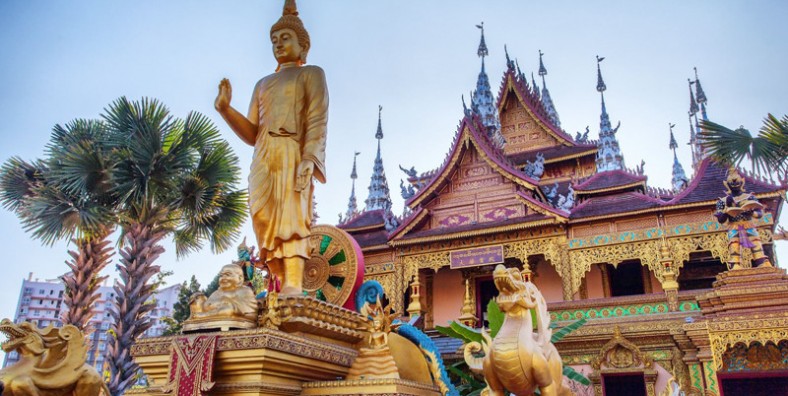 Jinghong Zongfosi Temple is located in a big courtyard in Jinghong City, near the Manting Park. It is the center for Buddhists to pay reverence to Buddha, also the oldest temple of Xishuangbanna. It consists of the Weihan- Buddha temple, Teaching Building of Buddhist College, Subo Pavilion and monk rooms. It has an area of 3,000 square kilometers.

Why is Zongfosi so special?

It is situated in Jinghong City of Xishuangbanna, Yunnan Province. It also neighbors Manting Park.

How to Get to Zongfosi Temple?

From Xishuangbanna Gasa Airport: take No.1 Bus to Zongfosi Temple, about 50 minutes

From Jinghong Passenger Station: take No.4 Bus to Zongfosi Temple, about 40 minutes 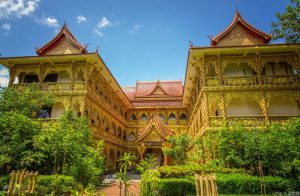 According to the local legendary, Buddhism was very popular when it was introduced to Xishuangbanna. Local people pay high reverence to Buddhism. They made the Buddha statues by diverse materials. One day, they found there was no bamboo statue. Though Xishuangbanna boasted bamboos, it was too hard to waving the statue with bamboos. However, they still tried hard. Finally, a skillful craftsman nearly finish, but without the head of Buddha, because it was difficult to show the mercy and kindness of Buddha. There was a old man coming here and telling local people he can do it when they were very disappointed. After a night, the Buddha statue was vivid. Local people believed that it was Buddha who made the wish of Buddhists come true. 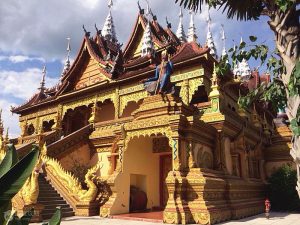 There is a Bodhi tree in the northwest of yard. It was planted by the princess of Thailand, Shilintong. The Bodhi tree is the symbol of friendship between Thailand and China.

There are many statues and scriptures in Zongfosi temple. There is one special Buddha statue, with seven dragon-head shaped hands stretching out and embracing his head. 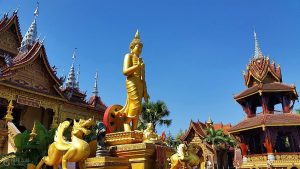 ●The Water-Splashing Festival,  the most important festival for the Dai People to celebrate New Year, is usually celebrated in the middle of April.

●Try to avoid Chinese public holidays, such as Labor Day (May 1st to 3rd) and National Day (October 1st to 7th). It is recommended that you start your day early so as to avoid crowds.

●It is better to prepare some mosquito products and sun block in case of insects and sunlight.
●Respect the local customs of Dai and other minorities.
●Do not touch the head of local monks.
●Respect their belief to Buddhism.
●It is better to take T-shirt, short and slippers becauce it is too hot in Xishuangbanna.