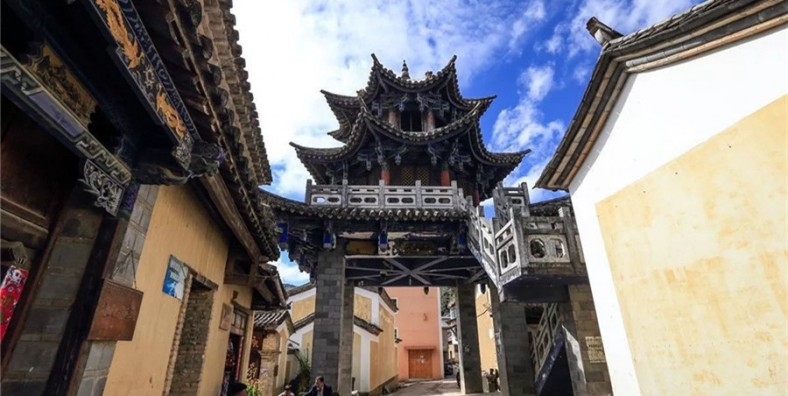 Why is Bixi Ancient Town so special?

Bixi Ancient Town of Mojiang Hani Autonomous County was formerly an important stage along the Ancient Tea Horse Road, a town where traveling merchants could not avoid. 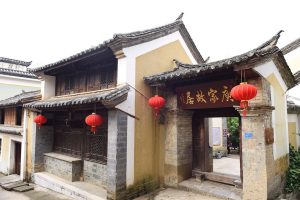 Bixi Ancient Town, along with the Ancient Tea Horse Road, is a living fossil of ancient international commercial road, the ethnic migration corridor, and the route along which Buddhism was introduced eastwards. It was a “living fossil” on the Yunnan-Tibet section of the Ancient Tea Horse Road, a significant stage that merchants and caravans traveling to Chuxiong, Dali and Lijiang in the north, Yuxi and Kunming in the east, and Pu’er and Xishuangbanna in the south, must go through.

What to see in Bixi Ancient Town

Going from Mojiang County to the north and experiencing 20 kilometers of winding landscape (it only takes 9 kilometers to drive via expressway), Bixi Ancient Town comes to you. Splendid scenery is so fascinating, such charming mountains and rivers, ethereal clouds and quiet villages are deeply rooted in travel memories. You may visit here along regular way on foot or by bus.

On the way to Bixi Ancient Town, anticipative plantains and bamboos on the roadside come to the eyes, erecting silently in attaching manner, and two fat gooses freely enjoy themselves in the water in remote pond. As the spring befalls just now, the seedlings haven’t completely planted in the field. Mountains embraced Bixi Ancient Town seems to be slightly hectic and constraint. It is located in the edge of the expressway, by which only five minutes’ drive is required. 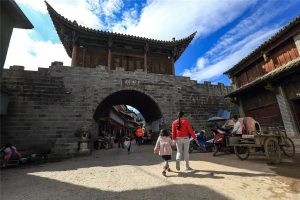 Bixi Ancient Town is big titled while being mentioned, not only former home of Yu Enyang, the “Hero of Restoration” and “Defending General” during the period of the republic of China taken the hometown of Yu Chengqing, a famous star. A well-known ancient trade route slowly flows from its memory of blue and green bricks.

Bixi Ancient Town, formerly known as Bisu, is former residence of Gongshun Prefecture in Ming Dynasty. The town, firstly built in the 4th year of Yongle Era in Ming Dynasty (1460), has been nearly 600 years of history till now. Once Bixi Ancient Town in the history was important hub and trade route post in the South of Yunnan, and numerable caravans and traveling merchants carrying Puer Tea passed through that “Ancient Trade Route” in the town. They stayed and traded here. Thanks to convenient traffic and frequent business travel, this almost unknown town was once in full flourish.

What are features of Bixi Ancient Town?

The buildings and streets of ancient town are designed in unique styles. The entire ancient town, centering on cross street, is divided into four downtowns, while the middle of the cross street is the center of the town. Civilian dwelling houses are mostly integrated with architecture arts with different styles including the quadrangular patio, courtyard house, three-courtyard house & one-screen wall, Zouma Zhuanjiao building (a building beside the front building at the right or left corner and surrounded by a corridor) and “Yikeyin” building (shaped like a Chinese seal), ridges, eaves, stone carvings, doors and windows, fences, wood carvings, brick carvings, plain ink paintings, stone painting and colored drawings dazzle and shine, and antique wares take on ancient favors with beautiful and grave shapes, fully embodying the wonderfulness and lasting charm of Han culture in Ming dynasty. 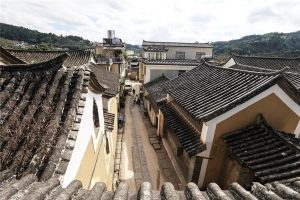 Historically, the ancient town was provided with the rampart and eastern, southern, western and northern gates, and emplacements and loopholes were available, looking as if a heavily guarded castle. It is historically alleged that the ancestors of Han nationality in Bixi Ancient Town are aborigines from Zhejiang and Jiangsu, who, followed Mu Ying, a general in Ming Dynasty to settle in Yunnan not only brought advanced farming technologies and business philosophy but also promoted the culture and goodness, flourishing schooling education. Gongshun Prefecture, a jurisdiction set up by Ming Government, lasted 128 years.

Bixi Ancient Town is quite, being silent like a specimen left amid the crack of the history. Walking on the empty street, along the way you are enabled to notice wooden buildings with carved patterns almost decayed and cobwebs closely distributed on antefixes. The street is deserted, only a few old man sitting under the turret leisurely chat. Occasionally several “tour pals” take out their cameras, randomly shoot against dated antefixes and broken stone carvings. The inns on the curbside retain their original appearances, shimmering green tiles seem to be telling remote stories. 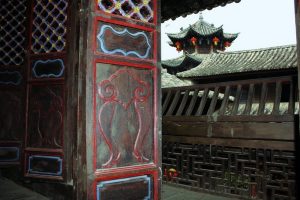 The town, still featured with ancient favor, it is the birthplace of outstanding talents. Yu Family, undoubtedly, was a local noble family, three brothers born here, were well-known role in the history of Yunnan. Yu Enyang, youngest brother, previously followed Li Genyuan and Tang Jiyao and learned the military in the school for noncommissioned officers in Japan, joined in Chinese Revolutionary League organized by Sun Yat-sen in Japan, initiated and commanded “Chongjiu Uprising” in Yunnan, and successively served as army commander of Yunnan Army, the governor of Guizhou, the principal of Yunnan Military Academy, was an influential celebrity in military circles, almost received the title of Cai E and Tang Jiyao, and was conferred with the military rank of admiral after death. Yu Enxi, second elder brother, the mayor of Kunming during the period of Republic of China, contributed and built the “Garden for Yu Family”, and established Asia Tobacco Company, the first cigarette fact[FS:Page]ory. The cigarettes titled with “Chongjiu” produced was to commemorate the “Chongjiu Uprising” led by his younger brother. Yu Enrong, the eldest brother, ever acted as general executive officer of Fudian Bank, director general of Finance of Yunnan, senator, and president of Kunming Branch, Red Cross. Three brothers had critical and great influences at that period. With regard to Yu Chengqing, their successor, is only a tiny figure at modern times.

What to eat in Bixi Ancient Town

Bixi ancient town is rich in fine rice noodles, red-colored rice cake, purple rice cake, bean jelly, tofu and a variety of Hani nationality flavor snacks. You are recommended to taste one or two of them if possible.

Other places worth visiting include the Mojiang Confucian Temple, the Sinan River Alsophila Tree Forest and the Laomaozhai Alpine Meadow.

How to Get to Bixi Ancient Town

There is the Passenger Station in Mojiang County for people to get in.

Take the taxi or rent a car to go to the Bixi Ancient Town.

Where to Stay in Mojiang County

Mojiang County is a county under the jurisdiction of Pu’er City, Yunnan Province, China. There are many hotels around Mojiang County. Yunnan Exploration will provide the best hotels for you. The recommended hotels are as follows: 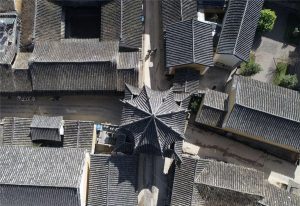 It is suitable to visit Mojiang County all year round. Like many other cities in Yunnan, Mojiang is a place where the seasons are like spring. There is no cold, no heat, warm and humid, especially suitable for human habitation, so you can go to Mojiang at any time.

When you traveling Pu’er, Mojiang County is a good place to be put on your list. It can be joined in whatever your Pu’er tour or Yunnan Tour.

One thought on “Bixi Ancient Town in Mojiang County, Puer”