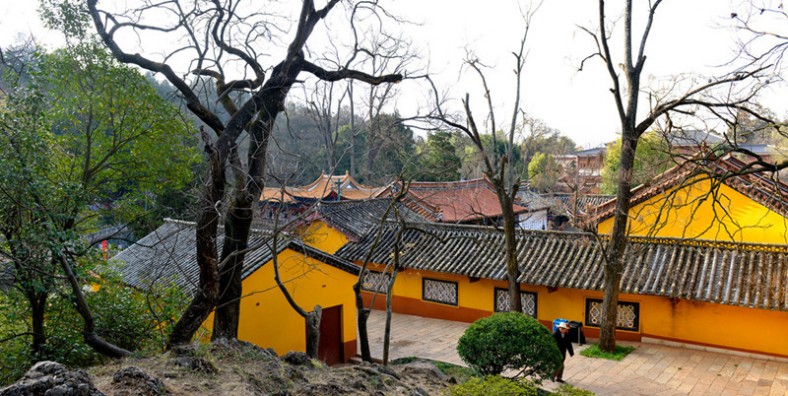 Black Dragon Pool Park or known as Hei Long Tan Park, is located at the foot of Longquan Hill, about 17 kilometers (10 miles) north of the center of Kunming. In this park, the most famous site is the Black Dragon Pool, which has an area of 600 square meters. The pool is divided into two parts by a bridge, and although the water is connected, the water at two sides has different colors and it is clear at one side but turbid at the other side. The fish in either side never swim to the opposite part of the pool. How strange! Moreover, for hundreds of years, this wondrous pool has never dried up, even in drought years. 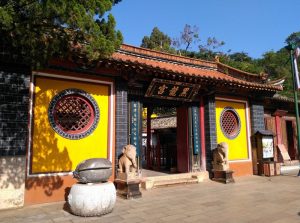 An ancient legend lends the Black Dragon Pool its name; it is said that a long time ago there were ten wicked dragons that caused much destruction and did great harm to people. One day, one of the Eight Immortals of the Chinese legend ‘Lu Dongbin’ subdued nine of the dragons and jailed them in a tower. Only the youngest black dragon was left, charging with protecting and benefiting the people as the price of its freedom. This dragon is believed living in the pool till today. The pool is divided into two parts by a bridge, and although the water is connected, the two sides are different colors and the fish in either side never swim to the opposite part of the pool. Moreover, for hundreds of years, this wondrous pool has never dried up, even in drought years.

Near the Black Dragon Pool is the Black Dragon Palace, which was built in 1394, in the reign of Emperor Hongwu of the Ming Dynasty (1368 – 1644), and rebuilt in 1454, in the reign of Emperor Jingtai of the Ming Dynasty. The whole palace consists of three halls and two courtyards, and the main hall features a stone plaque written by the governor of Yunnan in the Qing Dynasty (1644 – 1911) to praise the views here. The Black Dragon Palace is also called the Lower Temple, because when you walk along the stone steps, you come directly to the Upper Temple – the Dragon Fountain Temple – which is hidden among ancient trees. This 570-year-old temple includes Thunder Deity Hall, North Pole Hall, Sanqing Hall, Jade Emperor Hall and some other halls in which the deities of Taoism are worshiped. The Dragon Fountain Temple is the largest Taoist temple in southern China. 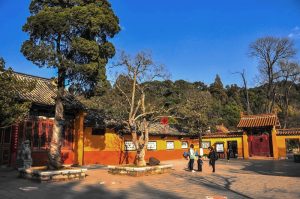 In front of the temple there are three huge and ancient trees: the Tang Dynastic Plum, the Song Dynastic Cypress and the Ming Dynastic Camellia. The main branch of the plum has already died of old age, but the remaining branches growing out sideways are still full of vital force and vigor. The 25-meter-high (82 feet) cypress has a very thick trunk – so thick that it takes four or five adults with linked arms to encircle it. The camellia is a prodigious tree which blossoms every year and always precedes the other camellias.

The Pavilion of Stele keeps many rare steles, tablets and plaques. The most famous is a tablet engraved with four Chinese characters – ‘Wan Wu Zi Sheng’ – which means that all things in the world are propagating and developing, flourishing and animated. The inscription was written by a famous Taoist of the Ming Dynasty named Liu Yuanran whose handwriting is vigorous and lively. The four characters are written in one continuous stroke and look convex but feel concave to the touch, owing to the unusual way they reflect light. 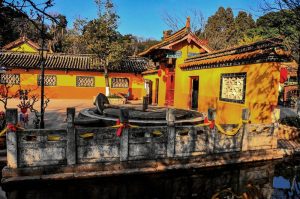 The Ming Dynasty was overthrown by the Qing Dynasty in Chinese history, and the potentates of the Qing were all from a minority ethnic group called ‘Manchu’. When the Manchu marched into the Chinese mainland and became the rulers, many people killed themselves to show their loyalty to the Ming Dynasty, including a scholar named Xue Erwang and his whole family. They drowned themselves, and the tomb of these loyalists is located beside the Black Dragon Pool.

In fact, centered by the Black Dragon Pool, there are also many attractions in this park, including Longquan Upper Taoist Temple and Lower Taoist Temple, Plum Garden, Azalea Valley, Red Maple forest, etc.. The Black Dragon Pool is only one of highlights of the park. There is a very cool stream running throughout the park and you can follow it up through bonsai gardens, different plantations and different types of trees.

The Dragon Fountain Temple is the largest Taoist temple in southern China. This temple was originally built in 1394 during the reign of Emperor Hongwu of the Ming Dynasty and later rebuilt in 1454 during the reign of Emperor Jingtai of the Ming Dynasty, so it has a hundreds-years-old history. The whole palace consists of three halls and two courtyards, including Thunder Deity Hall, North Pole Hall, Sanqing Hall, Jade Emperor Hall and some other halls in which the Dragon King (the God of Rain in Chinese mythology) and other deities of Taoism are worshiped.

To get here, you can take the Subway Line No.2 in blue to the second last stop Longtou Street Stop and walk 20 minutes to get there.

It takes tourists about 40 minutes to Black Dragon Pool from downtown of Kunming.

1. Best time to visit: From December to next February is the best time to visit, when is the flower season of plum and you can admire plum flower.
2. Tickets Fee: Free for children under 1.1m (3.6ft).