A great choice of products has been seen displaying and selling during this 4-day event, such as tea and cured beef from Yunnan, and snacks and ethnic dressings from Myanmar. The fair drew not merely individual consumers, but the attendance of both Chinese and local enterprises.

“We have reached agreements with two companies from Lincang. They will soon help us sell our products around Yunnan,” said Ma Daw Daw, founder of a food company which specializes in making egg rolls.

“This fair has certainly brought new opportunities to small companies in Myanmar, just like us,” she continued. “I’ve long been hoping to expand our business to China, and I’m now excited and confident about the company’s future.”

So Min, on the other hand, owns a company manufacturing glass noodles. “I’ve learned much about the nature of border trade between China and Myanmar this time. In fact, the fair inspires me and allows me to get a clearer picture of what I should to do next.” After talks with Chinese entrepreneurs, he said he is very optimistic about the development of Lashio and the Qingshuihe Port nearby. “I’ve decided to open a branch in Lashio. Once it’s done, everybody here would be able to enjoy my glass noodles!” So Min also made many new friends during the fair.

Fulilai Group has long been an active participant in the China-Myanmar border trade. This time, they signed an intentional cooperation agreement with Haicheng Holding, a Yunnan-based conglomerate, regarding real estate development and the establishment of border economic cooperation zones. 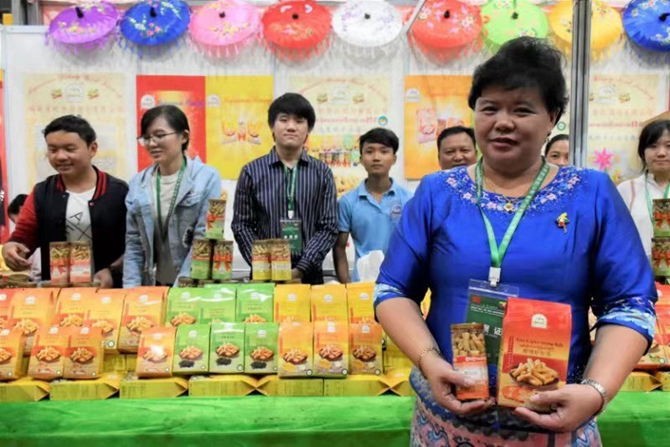 This border trade fair has strengthened the ties between peoples of China and Myanmar, and built up a brand new platform for economic exchanges and cooperation.

It has also injected considerable vitality to the economic life in Lashio. “I hope such event will be held every year from now on, so we can always get access to Chinese products we like,” said a local consumer.