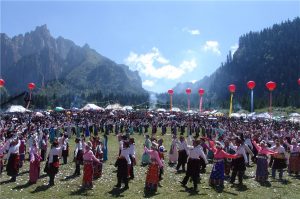 Tibetan Guozhuang Dance is one of the three major Tibetan folk dances. Guozhuang means singing and dancing in a circle, homophonic with Guoxie in Tibetan language. It originated from the form by which Tibetans danced around a campfire, all the time. This dance has been with the Tibetan ethnic group throughout their history.

Ganzhuang is a kind of collective dance of Tibetan self-entertainment and without instrument. The Tibetan area of Shangri-La County in Diqing Tibetan Autonomous Prefecture calls it a Fruit Table(果桌), and consciousness is a joyous dance. 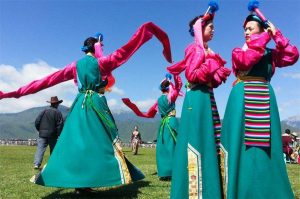 Guozhuang Dance emphasizes mainly the dancing postures and emotion expressing. Although Guozhuang Dance has various schools and categories, whose nature and dancing way are the same. If you can master one type, you can dance others after a short training.

The dancing steps of Guozhuang are agile and vigorous. On the plaza or courtyard, male dancer and female dancer get together, hand in hand, dance clockwise in a circle.When dancing, the dancers are singing the folk songs. Usually, male dancers take the lead to sing and then female dancers sing later on.

The loose, wide trousers of the male dancers look like the feathered legs of eagles, and the men’s movements are imitative of creatures, especially eagles, like an eagle spreading its wings, hopping, and soaring. Women expose their right arms during dancing, with the right sleeve waggling behind. Moving around a circle, they sway their joined hands frontward and backward, keeping beats of their steps, until very late at night.