The Wooden Drum Dance is a folk dance popular among the Miao, Li and Wa ethnic groups in southwest Yunnan. Wooden Drum Dance of Wa Ethnic Minority is mainly distributed in Yanshuai(岩帅), Danjia(单甲), Nuoliang(糯良), Menglai(勐来), Banhong(班洪) town of Cangyuan(沧源) Wa Autonomous County, Llincang(临沧). Wooden drum dance can be seen everywhere in Washan counties. Currently, where there are more than 700 wooden drums ranging from big to small and 90% of the people can dance and sing with the drum. 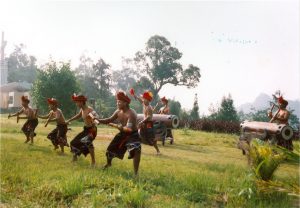 Wooden Drum Dance of Wa Ethnic Minority has a very long history. The wooden drum is regarded as a legendary divine instrument, the source of procreation and an important symbol of Wa history and culture. It reflects folk dance, song, literature, art, achievement and religious belief. Apart from their intrinsic value, the drum dances are also important to research into art, ethnology, folklore and religion. They have a unifying effect, and are still popular.

The general wooden drum dance is one part of major sacrificial rites that involve everyone, and the drum is highly symbolic. The acts of beating the drum and dancing to the drum is descended directly from an ancient and primitive culture, with strong values based on ancestor worship and reverence for nature. 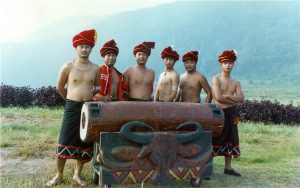 First the dancers move diagonally one step to the right, bending a little backwards and swinging their hands towards the head. Then they mark time once with both hands swinging diagonally backwards and the body leaning forwards. These moves are repeated. 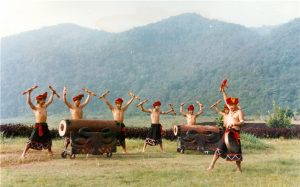