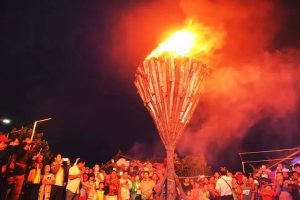 The Torch Festival or Fire Festival ( 火把节) is one of the main holidays of the Yi ethnic people in southwest China, and is also celebrated by other ethnic groups of the region. It is celebrated on the 24th or 25th day of the sixth month of the Yi ethnic calendar, corresponding to August in the Gregorian calendar. It commemorates the legendary wrestler Atilabia, who drove away a plague of locusts using torches made from pine trees. Since 1993, the government of the Liangshan Yi Autonomous Prefecture(凉山彝族自治州) in Sichuan(四川) has sponsored a modernised celebration of the festival, featuring wrestling, horse racing, dance shows, and a beauty contest. Different ethnic groups set the festival at different time

The original Torch Festival, according to some scholars, was based on a calendar used by Bai and Yi ethnic groups in ancient times. The calendar included 10 months, 36 days in a month, and two Star Returning Festivals in winter and summer respectively. The two Star Returning Festivals were both considered the New Year, and the one in summer was called the Torch Festival as people often lighted a torch on that day. There are also many other legends about the origin of the Torch Festival, yet all of them have the purpose of offering sacrifice to duties and dispelling ghosts, as a wish for a harvest.

Traditions and Custom of Torch Festival in Each Dynasty 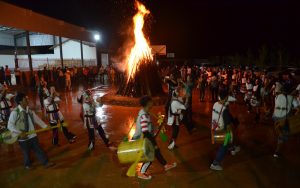 In the Torch Festival, every family needs to light a torch and hold the torch to illuminate the corners in the room and walk around the fields. Some villagers even have torch parade so as to drive away all bad lucks and pray for a harvest. The custom of holding a torch to shed light on tree and field was found in Han people(汉族) in Southern Song dynasty(南宋). In Ming(明朝) and Qing(清朝) dynasties, people in Zhejiang(浙江省) and Jiangsu(江苏省) provinces had the custom as well. The most attractive activity is the Bonfire Party(篝火晚会). People play music instruments like yusheng (乐声), yueqin (月琴) and sanxian/三弦 (three stringed plucked instrument), singing and dancing for a whole night.
Chinese Version: http://www.ynich.cn/view-ml-11110-1407.html