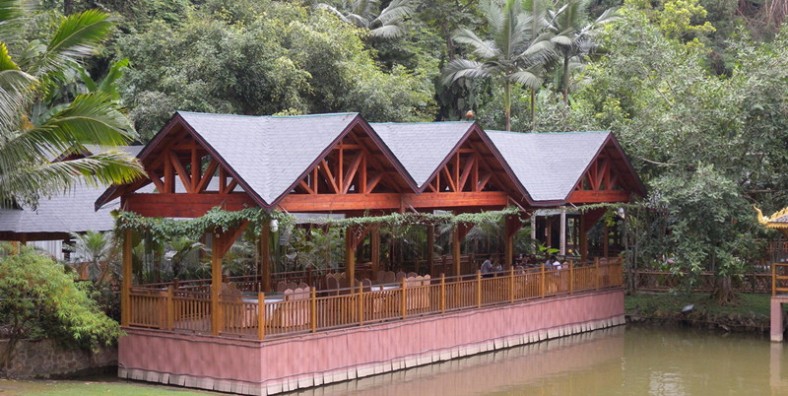 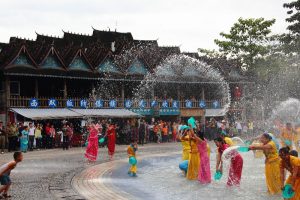 Xishuangbanna Primeval Forest Park, also called Xishuangbanna Virgin Forest Park,  is 8 kilometers east of the Jinghong City and north of the Lancang River. Situated in a river valley of 720 to 1,355 meters above sea level, the forest park has an area of 1,700 hectares of which 98％ is covered by trees, and is thus the largest comprehensive ecological place of interest in the prefecture. The park gives prominence to the features of primeval forest, wild animals and ethnic culture and custom. It is highlighted by three major themes: primeval forest, wild animals and ethnic folklore. And you can also enjoy and play a part in the local ethnic activities such as the Dai Water Splashing Festival, Aini capture marriage custom and the grand ethnic performances

Why is Xishuangbanna Primeval Forest Park so special?

In the Primitive Forest Protection Zone, you will have chance to find out several types of trees which be referred to as “live fossil”, like Homalium, Cyathea Spinulosa and Podocarpus Imbricatus Blume, etc. Giant Parashorea Cathayensis is also an amazing site in this zone.

Where is Xishuangbanna Primeval Forest Park?

Xishuangbanna Primeval Forest Park is 8 kilometers east of the Jinghong City and north of the Lancang River, in a river valley of 720 to 1,355 meters above sea level. It is in the edge of the northern place of south of the tropic of cancer.

How to Get to Xishuangbanna Primeval Forest Park?

● Travelers can take Flower Garden-Forest Park Bus in the Bus Station near Jingyong Restaurant. Buses departure every one hour from 8:00 to 12:00 a.m. The departure time in the afternoon are 15:00, 16:30 and 17:30. The bus ticket is RMB 5.
● Taking bus from Jinghong to Mengyang or the taking original forest park dedicated shuttle for visitors to get there.
● The west side of Jinghong is long-distance bus terminal, there is shuttle bus to reach the forest park for tourists. The fare is 3 Yuan. 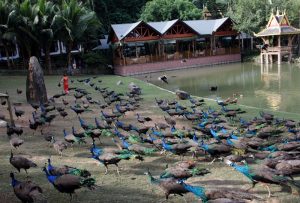 At the heart of Xishuangbanna Virgin Forest Park is the Peacock Park. The Peacock Park recreates the legend of Jinhu Lake, complete with an artificial lake. According to legend, Jinhu Lake was where Princess Namnu Nuona and Prince Zhao Shutung got to know each other and fell inn love.

Xishuanggban is widely crowned as “The Home of Peacock”, because there are a lot of peacocks living in Xishuangbanna. Peacock owes a holy position among Dai people and is the totem of Dai people. Peacock stands for happiness, beauty, goodness and luckiness.

Peacock plays an essential role in locals’ daily life. Visitors can find that some folk customs and events such as the ritual of worshiping ancestors, Legend between Prince and Peacock Princess are related to peacock.

The Legend between Prince and Peacock Princess

According to the local narrative poem, there are seven princesses from heaven once came to the Jihu (literally Golden Lake) to take a shower. And the prince named Shaoshu saw the seven princesses were playing around the lake when he passed along the lake by elephant.

Prince Shaoshu and the youngest princess named Nannuona fell in love with each other at the first sight when they met. They finally become a couple. 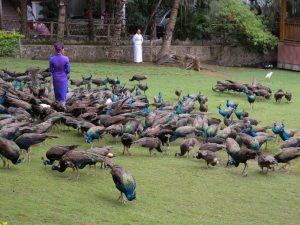 ● Flight of a Thousand Peacock

The highlight of Peacock Park is the daily Flight of a Thousand Peacock, a performance involving one thousand peafowls. They flew out of their sanctuary to land on the lakeside, where they were fed, before eventually returning to their sanctuary on the opposite bank of the lake. Visitors are invited to feed the peacocks as well as to have their photographs taken with them.

In addition to the peacock show, there are also performing bears – it is something which made me feel a bit uneasy, as I am concerned whether the bears were mistreated. At the end of the show, the bear was so smart they it could pick up its own pedestal and take it out of the cage.

The Nine-Dragon Waterfall is a waterfall within the Xishuangbanna Virgin Forest Park. In front of the waterfall is a statue entitled Jiulong Subduing Nine Dragons. There is also a pavilion here where tribal performances are stage. You can also try out some local candy on sale at the stall near the waterfalls. 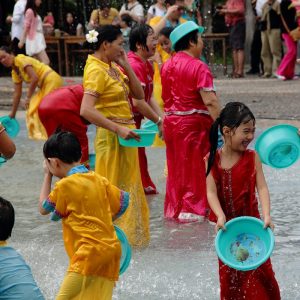 Located within the Xishuangbanna Virgin Forest Park is an Ainu cultural village. In this village, we get to know the Ainu people, their history and lifestyle. There are also songs and dance performance, and welcome dances where visitors are invited to join in.

The Ainu village is reached via a suspension bridge. It spans a river below. An alternative to using the bridge is to cross the ravine by glider.

October to June in the following year is the best time to go. Spring, autumn and winter is appropriate, because here is “a warm land without winter”. The summer heat in Xishuangbanna is intolerability with much rain.