Ashima(阿诗玛), an epopee of Yi Ethnic Minority , is popular in Shilin Yi Autonomous County(石林彝族自治县) of Kunming. It is one of the Intangible Cultural Heritage in Yunnan, which reflects the history and legends of  Yi people.

Ashima was originally sang in Yi language, before the 1950s, the Ashima singing in Sani Yi language is popular in Sani and Yi ethnic minority areas. The Chinese translation version and other forms of  Ashima made a good impact at home and abroad after its publishing. However, The Sani language version Ashima is endangered in the Sani Yi ethnic area. Nowadays, there are few singers can sing Ashima in Sani language. 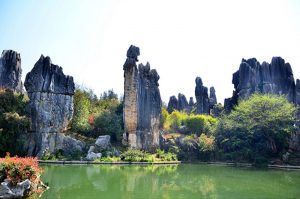 Ashima tells the story about Ashima and Ahei in oral poetry and narrative melody. It depicts Ahei and Ashima’s perseverance in fighting against the powerful, and at last they become the echo in the mountains and the stone peaks in the stone forest. Their story left beauty to the world, shows that light will defeat darkness, beauty will overcome ugly and freedom will conquer oppression, which reflects the character and spirit of Sani people of the Yi Ethnic Minority. In the minds of  Sani people, Ahei and Ashima are the symbols of hero and beauty.

Ashima is sing  by five words sentences(五言句), using the skills such as foreshadowing, hyperbole, irony, and so on. For the artistic form, it uses homophonic, anadiplosis, zeugma, simile and other skills. Ashima was singing in different occasions, mainly in the festivals, weddings, sacrifices, funerals, labor and daily life. Among them, Ashima is most sang in wedding. 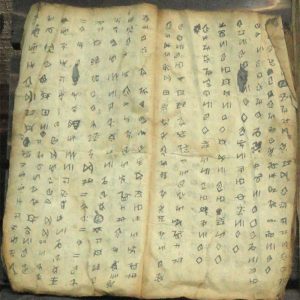 Since the publication of the Chinese edition in early 1950s, Ashima has been translated into English, French, German, Spanish, Russian, Japanese, Korean and other languages, spread all over the world. In China, it was adapted into a film, which is the first colorful wide screen stereo music musical film(彩色宽银幕立体声音乐歌舞片). It has also been adapted into Beijing Opera, Dian opera(滇剧), opera, dance drama, Sani opera(撒尼剧) and so on. The Chinese version was rated as China’s “Hundred Excellent Chinese Literature Books in the Last Century(百年百种优秀中国文学图书)” in the 20th century, and Ashima dance drama was rated as “Chinese dance classics of the 20th century(中华民族20世纪舞蹈经典)”. As a recognized outstanding work of Chinese folk literature, Ashima has been compiled into the textbook of folk literature for colleges and universities, collected in the authoritative dictionary Cihai(《辞海》) and Encyclopedia of China–Chinese Literature（《中国大百科全书·中国文学》）.