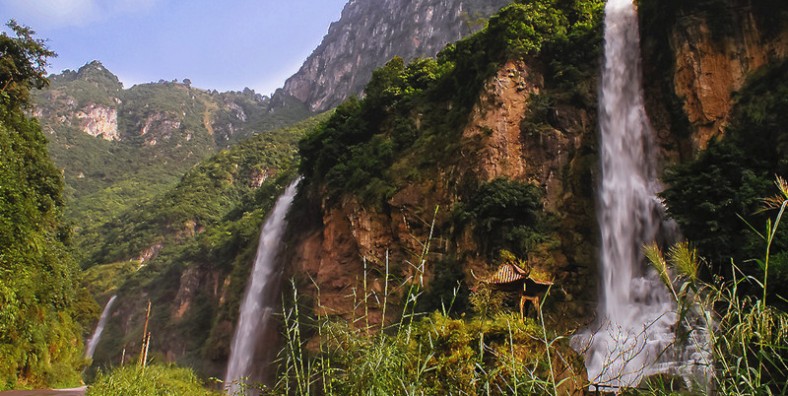 Located in Daguan County of Zhaotong, Huanglianhe River Scenic Area has a grand waterfall group hidden in the depths of the mountain valleys. Water curtains, caves and many other spectacles make this scenic area an attractive spot in Zhaotong.

Best Time to Visit: From Early Summer to Autumn

Recommended Visiting Time: Within Half Day

Why is Huanglianhe River Scenic Area So Special?

Huanglian River is a famous tourist destination in Zhaotong and is reputed as the hometown of waterfalls. It boasts the pretty of south China and the landscape of north China, which integrates the sceneries of mountains, rivers, forests and caves into one. The grand waterfall group hidden in the depths of the mountain valleys is the highlights here.

Once upon a time, Miao people lived a rich life in Huanglian River area where there are beautiful mountains and clear waters. A couple of young people named Alusuo(a good hunter) and Amanpa(a good weaver), who knew each other in the labor and fell in love with each other during the Song of May 5.

One year, when they were ready to get married, the drought devil suddenly burst into the Huanglian river cutting off the stream, the grass and trees withered, all the Miao people facing the survival danger. Later they knew that a man and a woman must sacrifice their lives to jump off a cliff, splattering their blood on the drought devil to save the people. The two young chose to exchange the green mountains and clear waters with their life. So the place where they lived before became waterfalls forever existing in the world.

The groups of waterfalls of Huanglian River have more than 40 various beautiful waterfalls distributing in the beauty spot which covers an area of 25 square kilometers. Here are also thousands of peaks and gullies competing with each other, and even limestone caverns like White Elephant Cave. The mountains, waters, forests, and caves make one integrated mass; ruggedness, elegance, strangeness and remoteness make this place a real wonder. 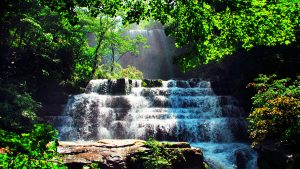 Tourists can arrive at Zhaotong city first, then take bus No.1 to Zhaotong Bus Station to take the coach to Daguan County. Located 5 kilometers away from Daguan county, there are special lines and mini-bus running to Huanglian river scenic area.

Gepu Waterfall: The major ones are the Gepu Waterfall (the Singing Waterfall) in the east of the scenic spot and got the name for the antiphonal singing of the elegantly-dressed Miao people at the Maypole Festival.

Shuishangwutai Waterfall: Also called The Stage in Water, it’s named after a huge stone platform resembling a stage. In fact it’s a flat slate slanting westward. Underground spring overflows out of the crannies, runs across the slate and finally falls into the swag. Over the slate covers projecting cliffs and around it circles the spring. All these would remind you of a stage on the water.

Welcoming Waterfalls: Two Waterfalls Welcoming Visitors is also named Suona Waterfalls (suona: a kind of Chinese music instrument with loud and clear sound) because visitors always hear its noisy sound first before they can see it.

Pearl-curtain Waterfall: It is just like a curtain interspersed with shining pearls.

Water Shade Long Corridor: It derives the name for the rocks under the waterfall have been air or a long time and thus become now a long arc-shaped corridor hiding in the water shade.

Great Slide board: It is like the water slide board of the pleasure ground in big cities. Most visitors are willing to have a try on the “slide board” because it is exciting and safe. 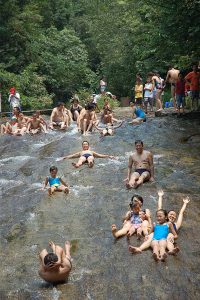 The recommended travel time is from May to October. Summer is the best time to enjoy the cool of Huanglian River Scenic Area.

At present, there are more than 100 beds in Huanglian river scenic area, and more than 1000 beds in Daguan county which can meet the needs of travelers.