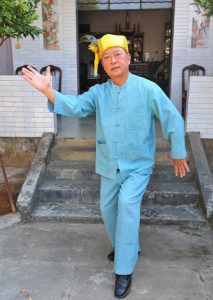 Jin Xingming was admitted to the Dai Opera Team of Luxi County in 1960, and later to the Dai Opera Troupe of Dehong Prefecture, where he studied under Cao Ruqun(曹汝群). He plays the role of Dai opera. His figure, singing voice and eyes can coordinate organically. He has a unique style, good costume and easy performance. He has been the hero of the Dai Opera “Ebing and Sangluo”. He also writes and directs the Dai Opera and writes and sings Dai narrative poems, folk songs, Allegro and “Shou Xiu” (Dai parrot poems). He created and directed Dai operas such as Longma Wuxi(朗麻吾昔), Princess Sanshi(三时公主), and Ayiluo Yonghan(阿銮洛勇罕), which were performed in the Luxi area and were welcomed by the Dai people. 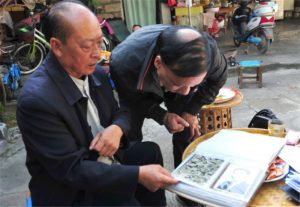 At present, he has been employed as a writer and presenter in the column “Famous Drama Appreciation”(名著名剧欣赏) of Dehong National Language and Culture Media Center. For the first time, Dai Opera was put on the TV screen in the form of rap performance, which was highly praised by the audience and experts. In recent years, he has also collated and explained dozens of plays such as Dai Opera “Ah Ying Xiang Meng”(阿銮相勐) and “Dao An Ren”(刀安仁).

Jin Xingming formed an amateur Dai opera team to teach Dai opera skills and brought out five apprentices such as Gong Deshou. In 1985, he was hired as a rural drama counselor by Luxi County Cultural Museum, and accepted as apprentices Xuan Siwang(线四旺), Fang Ershi(方二所)and Xiangtuan(相团) of Menghuan Street Office in Luxi City to impart skills.