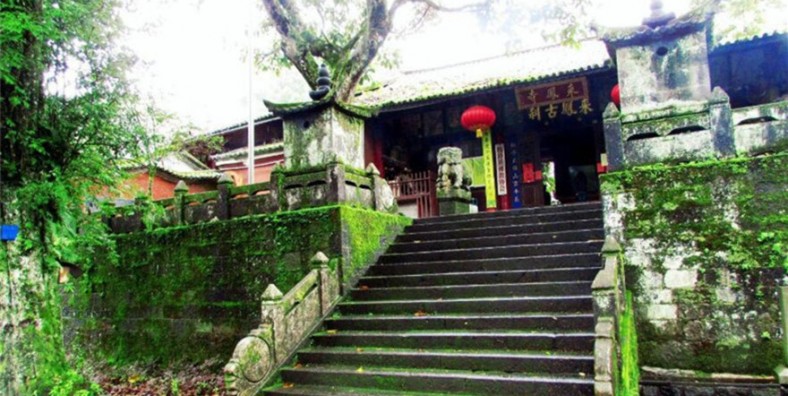 Located in the south of the county seat, the Laifeng Mountain is regarded as the symbol of Tengchong. Though not very high, it is strategically situated and difficult of access and more beautiful than any other mountain in the area. The hill is covered with luxuriant green trees. The name of the hill came from the shape of the hill, which looks like a phoenix resting at the Tengchong Basin. Textual research has shown that the Laifeng Mountain was formed about 900,000 years ago when volcanoes erupted here. It is one of the oldest volcanoes in Tengchong. When the sun shines again after a rain, the mountain is shrouded in mist and clouds. So the Laifeng Mountain is famous for its mist and clouds when the weather becomes fine after a rain, and is one of the twelve scenic spots in Tengchong. The whole park has an area of 97,000 mu. 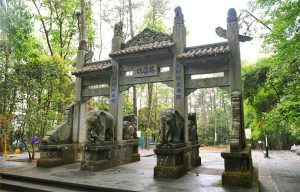 Laifeng Park lies at the foot of the Laifeng Mountain. It was built where the Laifeng Temple was built in the Qing Dynasty. Climbing on scores of steps, you will reach the gate of the Laifeng Temple, over which is a board engraved with “Laifeng Temple”, which was written by Zhao Puchu, president of the Chinese Buddhism Association. Everywhere you can see ponds, winding corridors, rockeries, little bridges and pavilions, which will remind you of the gardens in Jiangsu and Zhejiang. This Buddhist temple is well-known in the western part of yunnan and the northern part of Burma. In Laifeng Park there is an exhibition of historical relics and ethnic customs and cultures. The History and Nature Museum of Tengchong is also located inside the park.

Why is Laifeng Mountain National Park so special?

Due to its unique natural and cultural landscape, it is called a “green pearl” embedded in the first city of the extreme side. With over 90% plants coverage, it is the national forest park. It also offers the rich spicies, more than 300 species of wild birds and 50 species of mammals.

Where is Laifeng Mountain National Park?

How to get to Laifeng Mountain National Park?

It is 1 km from downtown of Tengchong. It is convenient for travelers to drive or cycle to Laifeng National Park. 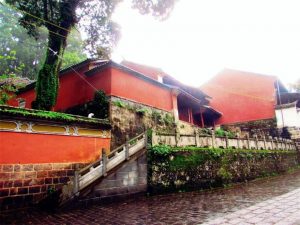 The architecture of Laifeng Temple is elegant and exquisite. The Buddha statue of Daxiong Temple is compassionate and solemn. The Yufo Temple has white jade reclining Buddha and eighteen arhats. On the left front side of the Daxiong Hall, there is the Sakyamuni Buddha Temple, which is dedicated to the statue of Bai Yu Sakyamuni Buddha. On the left side, there are four high-rise buildings in the ancient city of Tengyue.

Outside the garden on the right side of the Daxiong Hall, there is the Baiyuzu Shidian Temple, which was built in the first year of Daoguang of the Qing Dynasty (AD 1821). It is the place where the jeweler and jade industry colleagues are dedicated to the ancestors Baiyu real people and gatherings. 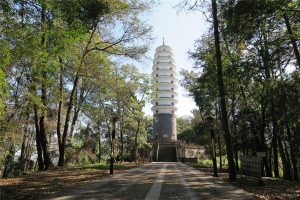 The Fengling Tower on the top of the mountain was built in the 7th year of the Qing Dynasty (AD 1827) and was destroyed during the War of Resistance Against Japanese Aggression. The tower is on the central axis of the Confucian Temple, like a pen, and lotus pond is like an ink-slab. If there are enough writing tools, the talents come forth in large numbers. Therefore, the folks call the Fengling Tower Wenbi Tower, a writing tower. The writing tower has become a symbol of the Tengchong people’s literary grace.

The Hot Sea and Hot Field

Best Time to Visit: Travelers had better to visit Laifeng Mountain from April to October, with fragrant grass and booming flowers. Relatively speaking, the summer is hot and rainy, the winter climate is cold, and the comfort is slightly inferior to the spring and autumn.