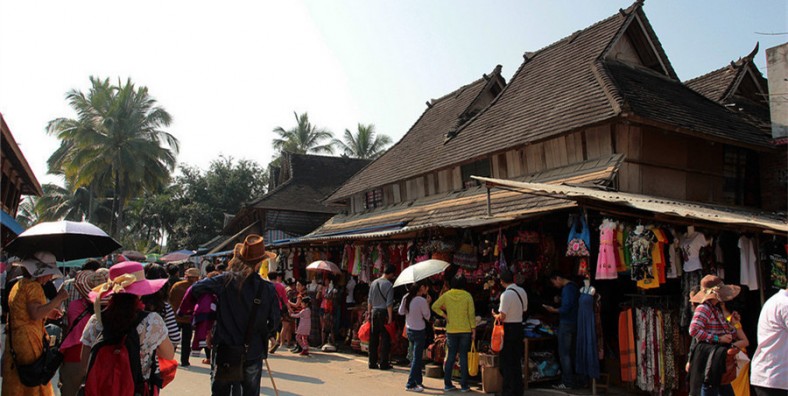 Why is Ganlanba so special?

Hundreds of Dai families have lived there for generations, so there is a strong tropical and ethnic flavor, which is a combination of bamboo houses belonging to the Dai families and water scenery.

Ganlan Basin is at an elevation of only 530 meters, which is the lowest in Xishuangbanna. Meanwhile, it is the hottest place there. The hot climate provides for a wealth of natural products in the area. A wide variety of tropical fruits are produced there, such as coconuts, betel nuts, bananas, mangoes, lychees, starfruits, jackfruits, passion fruits, and so on. In addition to fresh fruits, Ganlan Basin also produces a lot of preserved fruits, so fresh fruit and preserved fruit markets can be seen everywhere.

Ganlanba is located in the lower reaches of Lancang River, 40 kilometers from Jinghong City. In Dai language, it is called Menghan. There are hundreds of Dai households living in Ganlanba. Ganlanba is only 530 meters above sea level, being the lowest and hottest place in Xishuangbanna Dai Autonomous Prefecture. Locals give the title “the feather of peacocks” to describe Ganlanba. They regard Ganlanba as the peacock which is spreading its tail, it is a place with shining colors. Those bright Dai minority villages are looked like the decoration of the spreading tail.

How to Get to Ganlanba?

By water: take ship at the pier of Jinghong and go down along the river to Ganlanba, 2-3 hours

By bus: there are many buses departuring from the bus station near the Shuyuan Hotel of Jinghong City, 8.5 yuan for ticket.

Ganlanba is the nickname of the Meng Han Dam which is located in the middle reach of Langcang River in Xishuangbanna. Meng Han means the rolling place of clothes. It is said that, when Sakyamuni had his tour in Xishuangbanna to spread Buddhism, locals of Ganlanba put white clothes on the ground to expressed their hospitality of him. But the white clothes was not enough to cover the whole Sakyamuni’s route in Ganlanba. So locals rolled the former period and used to put forwards to continue the road. Sakyamuni was so touch by this behavior. So he named this place to remember the honesty people here, thus it got the name “Meng Han”. 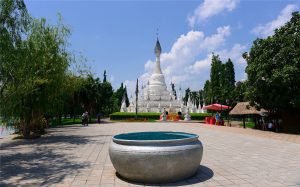 In Manting, which means “imperial garden village”, of Ganlan Basin, there are two big villages. One of them is Mansongman(曼松满), the garden village; the other is Manting(曼听), the flower and fruit village.

No matter which village you enter, you will see the typical Buddhist temple pagodasand traditional bamboo storied buildings of the Dai families. These villages are full of coconut trees, betelnut trees, mango trees, jackfruit trees, spiraea fruit plants and other tropical plants and flowers.

There is a large distance between the buildings in these villages. Tourists can have a walk in the courtyard and then ascend a bamboo storied building. The hospitable owner will warmly send cups of tea made with fresh tea leaves to them.

Ganlanba is one of the important Dai minority dwelling areas in Xishuangbanna, The splendid Dai minority culture constructs Ganlanba as an ethnic kingdom in Yunnan. Aiming to spread the unique culture to the world, Dai people had built some interesting folk villages. And inside these villages, the joyful activities between tourists and Dai people bring each one the deep memory.

Ganlanba is a big fruit garden with rich fruit types. The most famous ones include coconut, pineapple, watermelon, banana, and tamarind fruit. The coconuts and pineapples selling in Jinghong are majorly produced in Ganlanba.

The rubber forest is decorated by the tall and slim coconut grove. Ganlanba is one of the leading places to produce rubber.

Ganlanba consists of 5 villages, about 300 families. Locals here are hospitality and still keeping their own living style. When you walk on the lane during the evening, you may hear the melody of Lusheng and the rhythm of Xiangjiao Drum.

At every Dai calendar New Year, that is, during the Water-Sprinkling Festival, all people who go to the fair in the town of Ganlan Basin will gothere specially to have a tour, to worship, and to celebrate the festival. It is very bustling during that time.

In addition, performances are given there at 3 o’clock every afternoon. After that, large-scale water-sprinkling activities are held on the plaza. Tourists can participate and make merry.

Nearly every family in the Dai village can provide accommodation. A prior reservation is preferred in the busy season.

Special reminder: Most of the local rural inns use solar water heaters. Don’t take your shower too late, otherwise there will be no hot water.