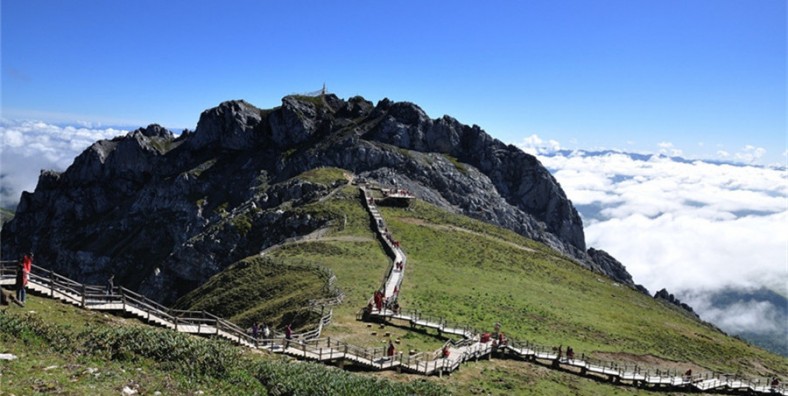 Located about 7km southwest of Shangril-La city with 15 min driving, Shika Snow Mountain is regarded as a holy mountain for the local Tibetans. It is famous for its various alpine and sub-alpine landforms and vegetation due to the high attitude and vertical climate. It's also a wonderland for tourism and a paradise for adventure.

Best Time to Visit: From May to July and from September to October

Why is Shika Snow Mountain So Special?

Also known as Blue Moon Valley, Shika Snow Mountain is regarded as a holy mountain for the local Tibetans. It is famous for its various alpine and sub-alpine landforms and vegetation due to the high attitude and vertical climate. Boasting its precipitous snow peaks, beautiful valleys, forests, lakes, meadows and numerous legends, it is a comprehensive scenic spots best reflecting the romantic charming of Shangri-la, which attracts many people here for hiking and adventure.

Where is Shika Snow Mountain – Location

Shika Snow Mountain from the Shangri-La county only seven kilometers. A four Circuit Direct area, about 15 minutes by car. It is connected with the Napahai nature reserve in the north and adjacent to the world natural heritage site Qianhu Mountain in the south. Towering 4,449 m. (14,596 ft.) high above the sea level, it occupies an area of 65 sq. km.

Shika in Tibetan refers to a mountain abounding in red deer, one of the auspicious animals in Tibetan Buddhism. It is said when Sakyamuni began to preach Buddhism in the Deer Park, two deer listened to him attentively in knee-down posture. Therefore, deer stands for common people and is regarded as mascots in Tibetan Buddhism. It is the symbol of longevity and justice. So it is regarded as a holy mountain for the local Tibetans.

In history, Shika Snow mountain was an important pass connecting Tubo and Nanzhao Kingdom in Dali. It was the first sacred mountain after entering Tibetan area along the Ancient Tea and Horse Road. It helped Zanpu of Tubo achieve the desire to live in harmony with the kingdom of Nanzhao, mutually beneficial and win-win, and promoted the beautiful marriage between princess of Nanzhao and Zanpu of Tubo. This sacred mountain helped the merchants of the ancient tea and horse road who have come to pilgrimage for generations to enjoy a smooth journey and prosperous business. It makes people living in Shangri-la happy and healthy.

The mountain is famous for its diversity of geological landforms and biological resources. With rich geo-tectonic features, it is an ideal place for scientific research and exploration. The impacts of the Quaternary Glaciation can be seen everywhere in the mountain. Unique valleys and blue alpine lakes surrounded by meadow and forest are extremely attractive to tourists.

According to preliminary survey, there are at least 399 species of seed plants. Among them, there are 12 kinds of national protected plants, such as Yulong Fern, Isoetes hypsophila, matsutake fungus, etc. There are 151 rare and precious medicinal materials, such as cordyceps sinensis, snow tea, beaded ginseng, etc. There are more than 100 species of wild birds and mammals, among which 30 species of rare and endangered animals, such as leopard, black-necked crane, Chinese Grouse, etc.

By Bus: Take bus line 9 from Shangri-la Passenger Station, and get off at the terminus. The bus is available from 7:30 to 17:00 at hourly intervals.

By Car-rental: Renting a car to Shika Snow Mountain costs about CNY 60 for a round trip. It’s better to agree a time with the driver for him to pick you up for the return trip. 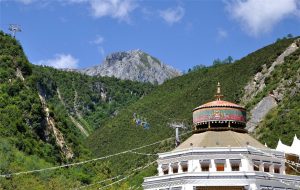 What to See at Shika Snow Mountain

In this area, with the diverse combination of multi-elementary features, including snow peaks, forests, flowers, gorges, meadows, lakes and caves, it is highly appreciated for its sightseeing availability.

Behind the main peak of the Shika Snow Mountain there is a famous valley which is featured by its precipitous and beautiful landscape. It is said that in 2003 when one American couple were enjoying the beautiful scenery in the valley, they disappeared mysteriously. With the help of government and thousands of people, they are saved three days later but their disappearance is still a confuse nowadays.

Lingxi Lake
It is said that the Lingxi Lake is a spiritual lake with verdant trees, flourish azalea and well kept vegetation which present with you a tranquil and quiet atmosphere.

Two cable ways are available on the mountain which can easily take you to the summit. Cable in this attraction has began to serve since 2006. With a 4,190-meter-long, this cable is the longest one in Yunnan Province. People can get to the peak (4,000 meters above the sea level) from the foot of the mountain (3,270 meters above the sea level). If you take the cableway up and down the mountain, the whole journey will take about 3-4 hours. The first section of the cableway goes directly to the Yalaqingbo ranch, which is 3764 meters above sea level. It is exciting to travel around the ranch and breathe the pure air of the plateau.

Then return to the ropeway station and continue on the second leg of the ropeway to the top of the mountain. Standing on the viewing platform can tourists see the peaks of surrounding snow mountains including Jade Dragon Snow Mountain, the Meili Snow Mountain and the Biluo Snow Mountain. But it will take 3 more hours. 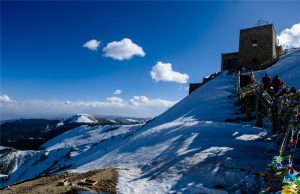 The best traveling time is from May to June and September to October when the temperature is most delightful. The landscape in the valley is particularly beautiful in late spring, summer and early autumn. While Shika Snow Mountain presents different landscapes according to the seasons.

In spring, the foot of the mountain is covered with green grass while the top is still snow-capped. The blue sky, floating clouds, white peaks, green grassland, cattle, sheep, shepherd boys, Tibetan houses, and wisps of smoke are quite harmonious with one another.

In summer, Mount Shika becomes a sea of flowers. The brightly-colored azalea flowers are intoxicating.

In autumn, the grassland at the foot of the mountain is dyed red by the Chinese Stellera in full bloom, while the mountain slopes are covered with Chinese larches, poplars, and birches, all of which are very fascinating!

In winter, the mountain is coated with snow. The white clouds, the white mountain, and surrounding white landscape with the Tibetan houses contrast superbly with the blue sky.

Napahai Lake
Established in 1984, it is a wetland ecosystem protection zone to plateau seasonal lakes and marsh meadows. The natural reserve is flat, surrounded by mountains. When October steps in, flocks of black-necked cranes, bar-headed geese, white cranes, sheldrakes regularly come here looking for food and for fun.

Dukezhong Ancient Town
As one of the largest and best-preserved Tibetan residence groups in China, the 1300-year-old Dukezong Ancient Town, situated at Shangri-la County, Deqing Tibetan Autonomous Prefecture, not only plays an important role in the Old Tea – Horse Road, but also serves as a corridor connecting Chinese and Tibetan language, people, religion and cultures. Until the fire disaster damaged the most of Tibetan dwellings in 2014, it still remains the traditional Tibetan architectural style.

► Shika Snow Mountain is only snow-capped between November and April or May of following year. During the rest of the time, the rocks all exposed.

► Considering the personal condition, tourists can buy oxygen bottle at the entrance of the first cableway.

► Shika Snow Mountain is close to Napahai Lake and the two can be visited in one day.

► High wind and low temperature on the mountain, so prepare warm cloth in advance to prevent wind and cold.

► The proper time to see the peaks of the surrounding snow mountains is from November to April of next year.