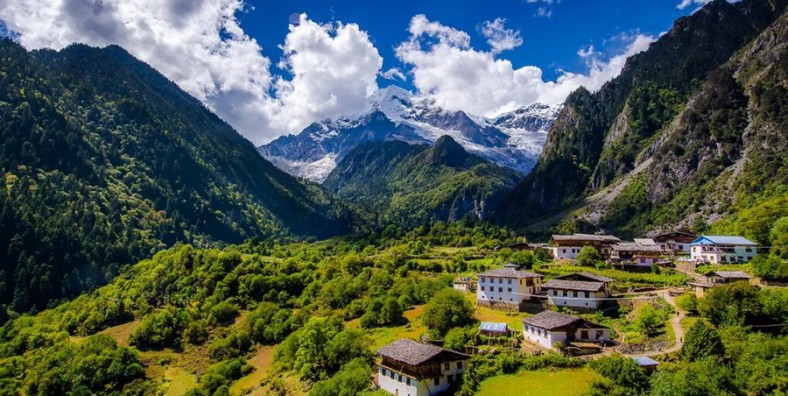 Yubeng Village is situated at the foot of the Meili Snow Mountain Range. From Upper Yubeng, trekkers have access to the Base Camp, and Ice Lake hikes. From Lower Yubeng, you can find the paths to the Sacred Waterfall, and if you are a hardcore hiker, Holy Lake, which from a higher vantage point, has an unobstructed view of the Kawa Karpo Peak (6,740 meters), and most of the rest of the mountain range.

Why is Yubeng Village So Special?

Yubeng Village is known for the beautiful valley it lies in and beautiful day treks which depart from it. Under the extraordinary craftsman by nature, Yubeng village is called the miniature version of the real Shangri-La.

It’s divided into two parts: the Upper Yubeng Village and Lower Yubeng Village, about 1 miles between the two parts. From Upper Yubeng, trekkers have access to the Base Camp, and Ice Lake hikes. From Lower Yubeng, you can find the paths to the Sacred Waterfall, and if you are a hardcore hiker, Holy Lake, which from a higher vantage point, has an unobstructed view of the Kawa Karpo Peak (6,740 meters), and most of the rest of the mountain range.

Where is Yubeng Village – Location

Yubeng is a Village in Northwestern Yunnan, situated at the foot of the Wuzi Mountain Peak of Niancimu Mountain Peak on Meili Snow Mountain, Yunling Country, Deqin County. One can only get there by trekking or mule-riding for 18 kilometers, and crossing over a pass of 3700 m.

Legend has it that for centuries Yubeng Village was unknown to the outside world. One day, an old man arrived in Xidang Village near Lancang River (the Mekong River) and tried to buy highland barley from the villagers there. No one knew where he came from, so some of the villagers followed him when he left, but on the way over the mountain the old man disappeared.

Later, the old man came back to Xidang to buy food again. The villagers objected and told him “we aren’t going to sell you barley or wheat, but just some millet.” When they loaded the food for the old man, one of the villagers made small holes on the bags. After he started his journey back home, the old man was followed again. He didn’t realize that the holes in the bags had spilled the millet along the way. However, when he reached a huge rock, he disappeared. So the villagers pried up the rock and Yubeng Village was discovered. 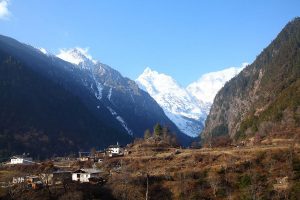 Due to no highway to access Yubeng village, one can only get there by trekking or mule-riding for 18 kilometers from Xidang Village, and crossing over a pass for 3700 meters.

How to Get Xidang Village?

There are four buses from Shangri-la to Deqin every day and one bus from Deqin to Xidang.

Tourists can rent a car from Deqin to Xidang Village. Remember to discuss the price with the driver and confirm the destination and route in advance to reduce unnecessary trouble.

Apparently best seen in the morning to catch rainbows. 4-5 hour hike. The path starts by crossing lower Yubeng, and turning right near the stupa. There are green trash cans along the path. There is a tea shop about 2/3 of the way to the waterfall. In the summer, the tea shops also provide basic lodgings and bedding if you want to stay overnight in the mountains. 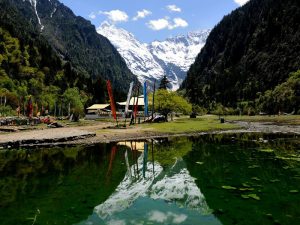 A high mountain lake south of Yubeng. 10 hour hike. Begin in Lower Yubeng, crossing the bridge to the left of the stupa and then taking an immediate right up a steep trail through a wooded mountainside. This part of the hike is slippery in parts and could be difficult in wet weather. After around 3 hours the trail contours round a slope into a meadow at 4300 m which has a partial shelter. This is followed by a relatively shallow ascent over rocky (and snowy) ground to the lake. Once at the lake it’s possible to go a little further towards the peak.

Base Camp and Ice Lake

From Upper Yubeng to Base Camp take about 3 hours. From the base camp to the lake is about another hour. The path leads towards the snow mountains, and starts off fairly easy, getting progressively steeper as you get to the top. Just before the lake, you may have scramble up some rocks for the last section of the walk, which could be a bit dangerous in winter. To reach the lake, you can scramble down the rocks to reach the bottom.

Route 2. Xidang – Zalang – Ninong – Yubeng River – Lower Yubeng Village – Upper Yubeng Village – Nanzongla Yakou  – Reshuitang – Xidang. The route is an inner Circumambulating Pilgrimage route for the Tibetan people. It is too steep and many locals are not going this way. 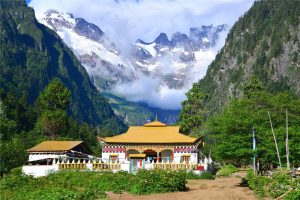 Both upper Yubeng Village and lower Yubeng Village have hotels, including an international youth hostel. The condition is general, and cannot guarantee 24-hour electricity and hot water bath. There is food and drink in the hotel, but expensive. There are also small Sichuan restaurants. You can choose to stay at the base camp, but camping is not recommended because some campers are frozen to death while camping.

► The entrance ticket of Yubeng Village are not sold separately and would be included in the package of Meili Snow Mountain.
► On the way from Xidang to Yubeng Village, you can know how far you have walked by watching the number on the wastebasket. No.45 is the location of first rest stop and No. 21 is the second.
► The most practical local delicacies are buttered tea and instant noodles. Yak butter tea is the best food to supply physical strength and prevent altitude sickness on the plateau.
► Before entering the village, be sure to leave your big luggage at the inn and pack light with your necessities.
►Due to the inconvenience of transportation, the supplies here are more expensive than the outside, so bring some food that can supply physical strength such as dried meat, chocolate and so on.
► It takes a certain amount of physical strength and perseverance, and remember to bring waterproof and warm clothes and waterproof hiking shoes. An alpenstock is very useful.
► Respect the local custom. The sacred lake is so sacred to local Tibetans that they can only drink and cannot be used for washing anything.
► The mobile phone may be out of signal on the way.
► During golden week and peak tourist season, it is best to book the accommodation in advance through Internet or telephone.
► Yubeng Village is a great place to take photos of Shennv Mountain Peak. In a sunny day, Nanzongyakou, Sacred Waterfall Inn in lower Yubeng Village, Meili Inn and Hikers Guesthouse in Upper Yubeng Village are the perfect places to shoot.