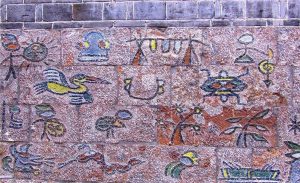 Dongba painting(东巴画) is one of the important contents of Naxi culture and art. It is spread in Lijiang Ancient City and Yulong Naxi Autonomous County, and also distributed in Shangri-la County of Diqing Tibetan Autonomous Prefecture. Dongba paintings are mainly made of wood chips, Dongba paper, linen, etc.The Dongba paintings come in a variety of forms, such as scrolls, woodblock paintings, playing cards, scroll paintings and so on. 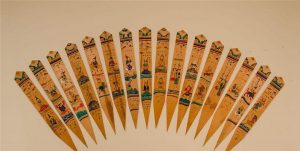 Card paintings are made of homemade earthen paper, which are divided into idol card paintings, five crowns, door ornaments, pictures and so on. 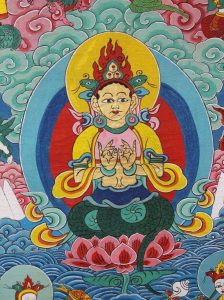 Scroll painting is a kind of painting form formed by inheriting the traditional painting of Naxi nationality, absorbing the cultural elements of Buddhism and Taoism, drawing lessons from the painting techniques of Tibetan and Han nationalities, especially the artistic characteristics of Tibetan Tangka(唐卡) statues since Yuan and Ming dynasties.

In 2006, the Naxi people’s Dongba painting was included in the first list of  intangible cultural heritage with the approval of the State Council.