Haicai Tune(Haicai Qiang) of Shiping(石屏)’s Yi Ethnic Minority  is a well-known folk song unique to Yunnan. It is circulated in the Yi village of  Shiping County(石屏县), Honghe Hani and Yi Autonomous Prefecture(红河哈尼彝族自治州). It is one of the Intangible Cultural Heritage in Yunnan, which introduces the cultural and daily life of Yi people. 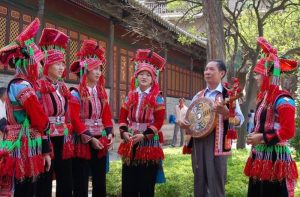 Haicai Tune is also called Dapangjiang(大攀桨), Daobanjiang(倒扳桨), commonly known as shiping Tune(石屏腔). It is one of the Four Tunes, together with another three kinds of tunes :Shayou Tune(沙悠腔),Four Tune, Five mount Tun. Yi people call all of them Tunes. Haicai Tun has a long history, there are records and poems in the Qing dynasty local Chronicles about it. Until now, legends,stories and customs about it are still spread among the folks. Such as at the Yilong lake (异龙湖)，the traditional song festival held in the tenth day of the second lunar month, there are Tiaoxian dance (跳弦), (Yanhe dance（烟盒舞）) and folk song (Haicai tune) singing competition.

Haicai Qiang tune(海菜腔) is usually leading by one or two people, and others (usually more than three people) followed, usually men and women sing in pairs. Its singing form includes leading singing, antiphonal singing, chorus, speaking sing and so on. Melodies are usually composed of Juqiang(拘腔) tunes, empty tunes, Zhengqi(正七)tunes, Yaqiang (㧎腔)tunes and Baihua(白话) tunes. They are complex in structure, large in length, neat in lyrics and rich in content. They can be described as songs in songs, tunes in tunes, and “song series in folk songs”. Folk singers sing a complete set of Haicai tunes, the least  takes 40 minutes, while the most takes more than an hour to complete. The lyrics of the Haicai tune can be divided into two categories: the main words and the lining words. Among them, the “main words”(正词) has only 28 fixed words, the format of which is equivalent to a poem of four line, seven words for each line. Most of the “linings words”(衬词) are improvised by singers and involve a wide range of contents. The sound range of Haicai tune is very wide. When a experienced folk singer sings Haicai tune, he will skillfully alternate the use of true and falsetto voices, which made thee tune  bright , beautiful and natural. Due to the blending of Yi and Han cultures in history, Haicai tune is now mainly in Chinese. 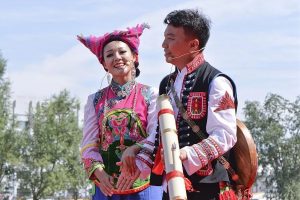 In the 1950s, Haicai tune was well-known around the world through the performance of Bai Xiuzhen (白秀贞), a famous Yi singer, and other singers ; in January 2004, Yi folk singers Li Huaixiu (李怀秀) and Shi Wanheng (施万恒) participated in the “Western Folk Song Television Competition” (西部民歌电视大赛) held by CCTV to sing Haicai tune and won the golden prize of the pairs of singers; folk singers Li Huaixiu (李怀秀), the older sister, and Li Huaifu (李怀福), the brother, participated in ” The Second North-South Folk Song Competition of China” (第二届中国南北民歌擂台赛) held by the Ministry of Culture in Shanxi(山西) in August 2005. They won the title of “King of Chinese Folk Songs” and the first prize of original singing method in July 2006 when he participated in the National Young Singers Competition.