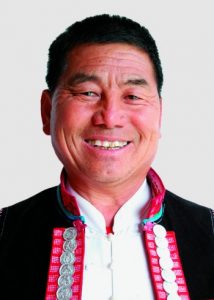 At the age of 14, he began to learn from Li Fazhong(李发忠), a well-known artist in the village. He was quite famous when he was 20 years old. In order to improve his skills, he went to Jianshui(建水), Tonghai(通海) and other places to seek advice from folk artists, and learned the singing skills of Four Tune(四腔) and Shanyou Tune(山莜腔). Through years of continuous learning and training, he had mastered more than 100 sets of Yanhe Dance(烟盒舞) routines, such as the Four Tuns of Dianchi(滇南四大腔), Cold Tune(冷腔), Sanbuxian(三步弦), Dove Eating(鸽子度食), Doutike(斗蹄壳), Ant Walking(蚂蚁走路) and Jade Bottles Pouring(玉瓶倒水), and so on. He became the master of local singing and dancing. Hou Baoyun’s Haicai Tune(海菜腔) has no rival in the local Yi villages and was called song boss(曲子老板) by the local people.

Hou Baoyun had participated in many performances at home and abroad and won many awards. He has been invited to participate in the performances of the Spring Festival Gala of four cities and eight provinces, the New Year’s Eve in Shenzhen(深圳) in 1999, and the artistic gala “Romantic Music of Heaven and Earth(天地浪漫曲)” at the opening ceremony of Kunming World Expo in 1999. In addition, he also participated in the recording of “Four Tunes in Southern Yunnan(滇南四大腔)” (as leading singer), and “Yanhe Vocal Music(烟盒声声大家乐)” and so on. 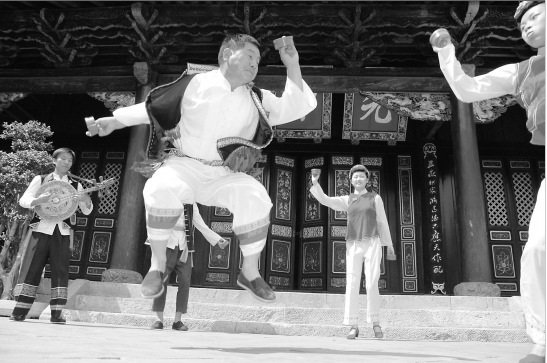 Since 1985, Hou Baoyun has been teaching Yanhe Dance(烟盒舞) and Haicai Tune(海菜腔) for a long time in Bawo Primary School(巴窝小学). In 1993, at the invitation of Tianfeng(田丰), he taught in Yunnan Ethnic Cultural Heritage Museum(云南民族文化传习馆). Over the past 10 years, he has trained more than 300 students, among whom Li Huaixiu(李怀秀), one of the most famous, won the Gold Prize in the Western Folk Song Competition held by CCTV in 2004 and the Original Singing Group Performance in the National Young Singers Competition in 2006.