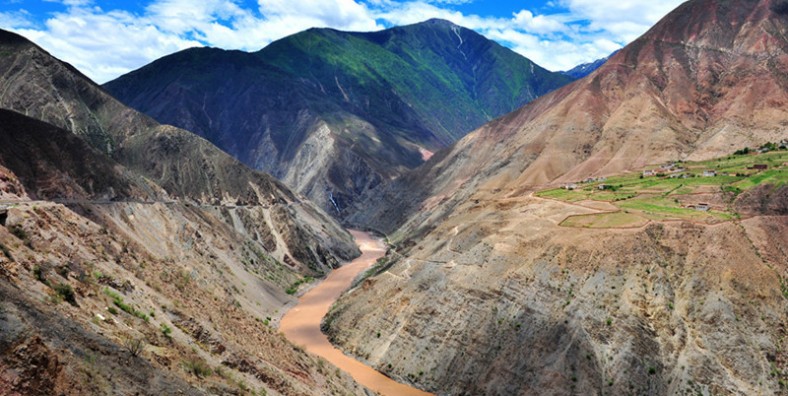 Lancang River Meili Grand Canyon, is located in the Deqin county of Diqing, Yunnan, China’s most beautiful grand canyon, one of China’s largest one of the most important nature reserve, and the sceneries are mostly the protective Yunnan golden monkeys and other rare species, as well as the typical mountain forest perpendicular band natural landscape.

Best Time to Visit: From Janunary to May

Why is Lancang-Mekong River Grand Canyon So Special?

Lancang River Meili Grand Canyon, is China’s most beautiful grand canyon, one of China’s largest one of the most important nature reserve, and the sceneries are mostly the protective Yunnan golden monkeys and other rare species, as well as the typical mountain forest perpendicular band natural landscape.

Lancang Melli Grand Canyon is located in Deqing County of Diqing, Southwest Yunnan of China, starting in the north from Foshan township, south to Yanmen township, 150 kilometers long, which is one of the largest local elevation difference in Yunnan province. The river surface is 2006 meters above sea level, with kagebo peak of Meili Snow Mountain(6740 m) on the left bank, Zhalaqueni peak of Baima Snow Mountain(5460 m) on the right bank. The biggest altitude difference is 4734 meters.

Tourists can only rent a car get there and Yunnan Explore can provide the car-rental service with skilled driver and good vehicle.

After flowing into Meili Valley from Tibet, the surface of Lancang river becomes narrow with fast-flowing water and no way to cross this river. In the past local people all pass the river by zip line. However countless people and property fell into the river. This situation is forcing people to seek to change. In 1946 a Lijiang businessmen who do business in Yunnan Tibet and India is contributive to build a chain bridge, named Puqiao Bridge. From then on, people and horse can smoothly go through the river on the bridge. 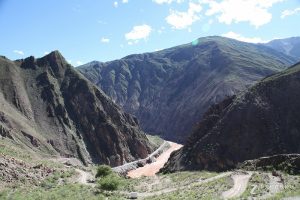 Liutong River Ferry
Lancang river canyon’s natural landscape, make the travelers open their horizon. Liutong River Ferry in Liutong River Village, Foshan Township Deqin County, is the dangerous ancient ferry of Lancang River, is the Ancient Tea Horse Route. Long before the founding times of China, people rely on chain in the past to pass the river. The tools for passing through the river are a big bamboo tube, the river so called “Liutong River”.

The Chilly Wind Gap Wall of the Lancang River is another stunning landscape. Lancang River flows through the Luoma River into the river’s estuary, and the river become narrow. Many centuries later, the river like a sharp sword, split the rocks in half. On both sides of the river, rock is straight like wall, about 100 meters long. Wave rolled up the wind, the wind pushes the wave against the rock wall, and makes a huge roar. In the past, people dig through the stone walls of the east rock and building a walkway connecting to Tibet and India.

Meili Snow Mountain
Meili Snow Mountain is one of the most sacred mountains of Tibetan Buddhism. It boasts numerous snow-clad ridges and peaks, thirteen of which are more than 6,000 meters above the sea level. Kawagebo Peak, the highest in Yunnan Province, has the most splendid view rising about 6,740 meters.

Yubeng Village in Deqin County
Yubeng is a secluded small Tibetan village tucked away at the foot of Meili Snow Mountain in Deqin county, the northwestern corner of Yunnan Province. It is only accessible by foot or horse/mule. But the trip, however arduous, is worth it. Yubeng is divided into an upper and a lower section. Both parts offer fabulous views of the Mei Li Snow Mountains. Lower Yubeng is smaller, quieter and closer to the lakes and waterfalls that you will likely visit during your stay.

Feilaisi Monastery
Feilai temple, the best place to watch goden peaks of Meili mountain at sunrise. So if u plan to watch sunrise, it’s absolutely a good idea to live at Feilai temple the night before. But actually it is unusual to see the goden peaks. The peaks of the mountains are often surrounded with clouds due to the high altitude they are. And this makes more interestings for Meili. There’s a kind of saying that, if any Japanese appears in this area then people can’t see the golden peaks that day. This is because Japanese are not welcomed by Tibetan people. Yes, they hate Japan and Japanese, just like people in notheast of China.