Nagu Hui Ethnic Town is located in the northwest of Tonghai County, backed by the Shizi(Lion) Mountain, facing Qilu Lake(杞麓湖), 14 kilometers from the county seat and 110 kilometers from Kunming, with an average elevation of 1800 meters. Nagu Ethnic Town is composed of Najiaying Village(那家营村), Gucheng Village(古城村) and Sanjia Village(三家村), is the hometown of overseas Chinese and handicraft, covering an area of 12 square kilometers. All the residents of the ethnic town are Hui people who believe in Islam, they maintain their own cultural traditions and customs. No matter diet and daily life, weddings and funerals, all have rich local characteristics and ethnic characteristics. There are three mosques in the ethnic town, one of which is Najiaying Mosque. 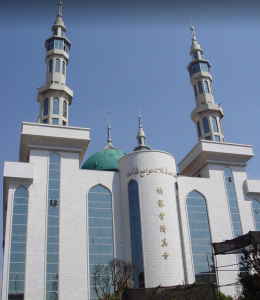 Why is Najiaying Mosque So Special?

Najiaying Mosque(纳家营清真寺) is located in Nagu(纳古) Hui Autonomous Ethnic Town, Tonghai County, Yunnan Province. It is an ancient Islamic Mosque in China. The mosque was built in the early Ming Dynasty Hongwu period(洪武年间) (In 1370), the current building was rebuilt in 2001, officially completed on October 2, 2004. Built according to the mountain, it is divided into five levels. The building area of the temple is about 10,000 square meters. It is the center of religious activities and education for Nagu Muslims.

You can visit Najiaying Mosque at all seasons.

There are long-distance buses from Kunming to Tonghai County. 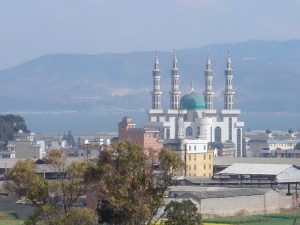 1. If you are not a Muslim, learn something about Muslims, mosques and local Hui People in advance;

2. Respect Muslim Culture and do not make noise in the mosque.

3. Know some general situation of Najiaying Village in advance.

4. You can participate in some cultural activities during festivals.