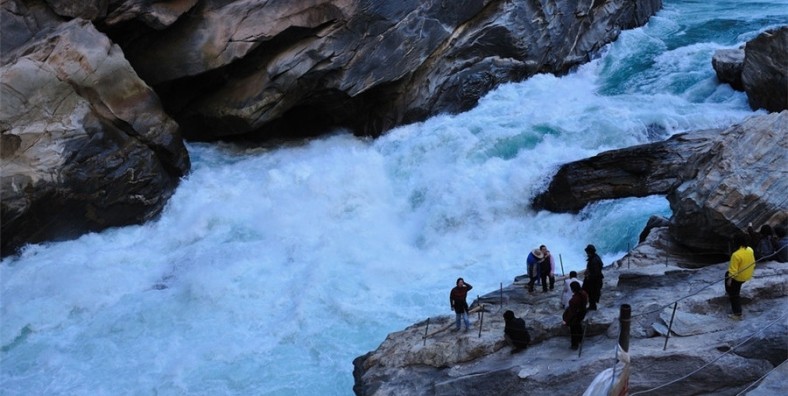 Compared to the upper section, middle section is more difficult and challenging, which attracts more and more backpackers. There are some rocks rolling from the mountain and no guardrail along the whole section. Since it’s underdeveloped and steep, good physical strength is required. It wound be the second day of Tiger Leaping Tour if travellers depart from the upper one. After the overnight stay in Halfway Guest House, continue to hike for an hour and a half, the Bamboo Forest is on the way, then you will arrive at Tina’s Guest House or Teacher Zhang’s Guest House. It’s best for travellers to take a rest and and grab some food there because the next part is the most challeging one that is well-known hiking route and no available road.
Some travellers go through the section by climbing the vertical ladder(天梯) built by the locals or hike along the Jinsha(Gold Sand) River and head to Walnut Grove between the middle section and the lower section of Tiger Leaping Gorge where the houses are constructed with rocks. It’s not recommended to climb the vertical ladder（天梯） because it’s kind of dangerous. Hiking along the section from Teacher Zhang’s Guest House to Walnut Grove via the vertical cliff takes about three hours. Travellers can enjoy the Ray of Sunshine（一线天） along the route and are able to take photos on Middle Tiger Leaping Stone(中虎跳石) by the river with water surging. taking a homestay in Walnut Grove is amazing experience, keeping away from the noise, seeing the bright star and vertical mountain, enjoying quiet night and great food. For some elderly people or who want a less challenging trip, hiking from Tina’s Guest House to Walnut Grove along the highway would be a good option, which is much easier and only takes nearly an hour.

Car rental
It’s better for travellers to rent shuttle car with someone else because it would be more convenient and economic than taking a bus. You need to emphasize that you are going to Middle Tiger Leaping Gorge in Shangri-La and must go through Qiaotou Town(桥头镇) when negotiating on price.

Bus
Lijiang-Qiaotou-Tina’s
For more and more backpackers, the buses depart from Lijiang Ancient Town for Tina’s Guest House via Qiaotou Town(桥头镇). Hikers can get off the bus at Qiaotou(桥头) and leave belongings on the bus which would be kept in Tina’s for convenient hiking to travellers and it’s totally free. Travellers can pick up the baggages from Tina’s on the second day and have lunch there. The buses depart from Tina’s at 3:00pm for Shangri-La with the fee for 50RMB per person.

Shangri-La-Middle Section of Tiger Leaping Gorge
There is a bus departing from Zhongxia International Youth Hostel(中峡国际青年旅舍) at 8:00am in Shangri-La for Tina’s Guest House（中峡客栈） via Qiaotou Town(桥头镇) with the fee for 50RMB per person.

Between April and June in the late spring and early summer and the autumn time during September to October is the best time to travel. During these two periods it is suitable to go hiking on the Tiger Leaping Gorge, also can see the Jade Dragon Snow Mountain scenery. The late spring and early summer the temperature is moderate, flowers on the meadow blooming like a piece of brocade which is charming.

After about 20 days of Mid-Autumn Festival, the plateau is autumn secnery which is the most wonderful time of Diqing plateau.

From June to September is the rainy season of Diqing plateau, although the scenery is beautiful, but not suitable to travel.

After October the temperature is very low, if one wants to visit need to bring enough warm clothes.
Tiger Leaping Gorge even in August is also likely to fall a few snowflakes, and day and night temperature difference is very big, there is a saying that “there are four seasons in a day”, so every season need to pay attention to keep out the cold.

1.It’s rainy season from July to September, Please pay attention to some clastic rocks rolling down from the mountain and don’t get too close to the river with water surging.

2.It’s dry season from December to February, strong wind or flocks of sheep may bring about the clastic rocks. Get perpared before hiking.

1. It usually hot in day time, you can bring shorts and T-shirt. As hiking will consume lots of physical strength, you could take some high calorie food such as chocolate, malted milk, sliced dried beef and so on.
2. When you hiking to the Shenzhou Waterfall located between Walnut Garden and Zhongxia Hotel, you must be very carefull, as it may fall stone with the waterfall which is very dangerous.
3. Each year from June to September is the rainy season of the Diqing Plateau. You’d better avoid this period as it may occurs debris flow and mountain rock fall.
4. Located at the high altitude area, surrounded by Hengduan Montains, the climmate in Tiger Leaping Gorge is complicate and changable. The temperature difference between day and night is big. Take think coat, down jacket, gloves, anti-skidding boots with you.

What to Eat in Tiger Leaping Gorge