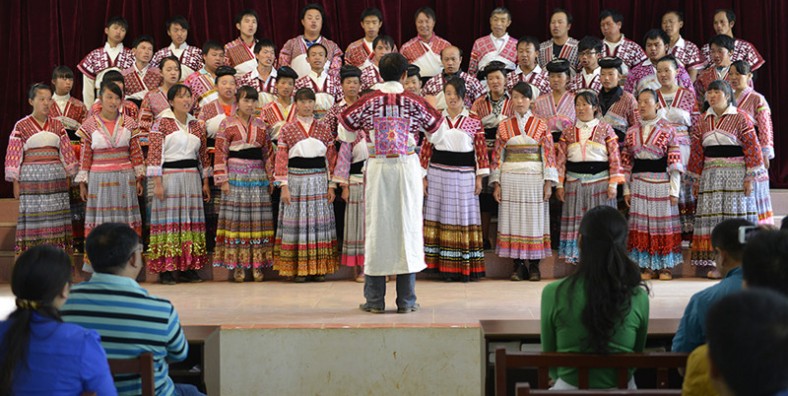 Xiaoshuijing (Small Well) is located in the southeastern quarter of Fumin Town, 17 kilometers away from Daying Town’s government, and can be accessed by a village road. The village is at an elevation of 2.38 km, and consists of 138 families, 447 people, all of whom are of Miao minority. It is also the biggest Miao village in Kunming.

There is a comparatively big Church in the village with a choir that sings beautifully. Miao villagers there have their ethnic group’s instruments; songs and dances are well established traditionally with simple and adorned social customs. Xiaoshuijing Miao Farmers Choir was first organized in 1986, and it has more than 63 members now. The group can sing over 400 songs and within 3 days they can learn and harmonize a new song. The oldest member in the choir is 36 years old while the youngest is 15. None of the members has ever been given professional training, they just practice hard every day; and every night they get together and rehearse their songs.

Xiaoshuijing Miao Choir is actually the choir in local village, but it keeps the Western tradition of singing, techniques and methods a century ago. Xiaoshuijing Miao Choir is actually the choir in local village, and there are many churches because of missionaries in Yunnan like this, thus it will be shocking to hear any choir singing, witha unimaginable number of farmers able to sing hymns.” Yunnan songwriter Jiang Mingchu said. The xiaoshuijing Choir became famous in the 2010 CCTV Young Singer Competition. Although ultimately failed to reach the final, the green song after the game, the farmer choir got staged in Spring Festival Gala, Central Conservatory of Music, Peking University Centennial Hall and United Nations Conference Music Hall, performing Handel’s “Messiah” , Beethoven’s “Ode to Joy,” Schumann’s “Tzigane” and Mozart’s “Gloria”, which is obviously more meaningful than the rank in Young Singer Competition.

The History of Xiaoshuijing Miao Choir

Xiaoshuijing Choir has existed for nearly a hundred years, of which members are neighbors or relatives and no one read music, thus it all depends on mouth and heart for generations, while the command learn it from the “ancestor” . The village has two choirs, and in order to ensure that “first group” sings always in the best condition, 40-year-old villagers will retire to “second group” while 13-years-old children are promoted into “first group”.

Their wonderful harmony has also been highly praised by a number of professional choral conductors and music experts, and it impresses with performing difficult polyphony and the traditional harmony. For centuries, the Western choral art has been developed constantly, while xiaoshuijing has kept the Western tradition of singing, techniques and methods a century ago , thus many foreign music scholars has come here to seek roots today. And interestingly, no one of the choir can really sing alone.

Today, xiaoshuijing village is awarded “ethnic characteristic village in Yunnan” by Yunnan government and gradually become a tourist attraction, receiving a number of tourist groups every day. However, the urban atmosphere has less influence on the small village baptized by Christian for a long time, and the villagers still works and sings all the day. They are still farming in fields just before coming to Shanghai for holding the concert.

In addition to the new original works and new artists around the world, there is also original music from remote areas in the 30th SSIMF. There is no lack of wonderful choral performances from anywhere in the current “Shanghai Spring”, and a choir named Xiaoshuijing Miao Choir from the depths of the mountains in Fumin,Kunming accidentally attracts much attention due to their preservation of the Western tradition of singing, techniques and methods a century ago. For carrying forward the original Chinese art, Xiaoshuijing Miao Choir is invited by the festival, and will hold “Chinese Memory · Yunnan wonderful soundtrack – Xiaoshuijing Miao Choir concert” at the Shanghai Concert Hall on May 8th.

Authentic farmers sing authentic “Messiah”: 30 kilometers north of Kunming in the mountains, there exists a small special Miao village called xiaoshuijing. It has a common pretty of Yunnan here, and it also sharesa inescapable poverty with other western areas. With average income of 900 yuan per year, farmers are working in wearing sandals and homespun made by themselves, with humming Handel’s “Messiah Asia “, Beethoven’s” Ode to Joy “; and when they sing together, even the authentic German will be shocked by their authentic ” German bel canto “.

Leaders appear in Young Singer Competition with the original “voice of Yunnan”: Since 2000, original ecology music of minority in Yunnan has constantly been explored and appeared, which promotes the heritage and protection of Chinese “source culture”. As an art form, the original ecology plays an important role in Chinese musical history. In Yunnan, Li Huaixiu&Li Huaifu’s “Haicai Qiang”, “Ase Tune” sung by Chuxiong Aguailao Yi chorus, “Messiah” byYunnan Fuming xiaoshuijing Miao farmer choir and some classical music are the most representative.

The concert will be separated into two parts: In the first part, several original ecology singers from Tibetan, Yi, Bai, Wa, Hani, Naxi, etc. will show to the audience the most original and classical folk music of minority in Yunnan. Previous CCTV Young Singer Competition winners of Yunnan province Li Huaixiu, Li Huaifu, Dapo maji, Little Apeng, etc. will head the list. He Jinhua and Dapo maji of Naxi once busted into tears on the spot of CCTV Young Singer Competition because the judges did not believe that their singing was original ecology folk song; the most famous DaGe Prince Gao Hongzhang will show us why songs of Yi are not only about singing but also about hitting and smashing; ancient Yunnan folk song “Asuowei” will be showed by sister and brother Li Huaixiu,Li Huaifu who are the gold medal winner of primitive tune and singer Huo Siyu will show modern adaptation, which may let the audience experience the “transmission” of folk music.

In October of 2003, the Xiaoshuijing Miao Farmers Choir took part in the First Chorus Festival of China’s West Area and won first place. Furthermore, singing 《The Same Song • Coming to Yunnan》 at a large concert and at the 2004 Kunming China International Tourism Culture Festival, the 63 members of the Xiaoshuijing Miao Farmers Choir all wore their gorgeous, traditional Miao costumes; and with their pure voices and without musical accompaniment, they sang《Please stay, guests from far away》,《The Same Song》, and 《Goodbye, Dear Friend》. These three Miao folk song’s unique sound, in addition to their beautiful harmony, made it seem that the audiences were in a forest and enjoyed the sounds of nature. China Chorus Association, Yunnan Chorus Society, etc. all claim, Xiaoshuijing Miao Farmers Choir is sound as “A perfect combination of folk singing style and beautiful four-part choir” and “The purest singing to ever come from farmlands”. Their sound is remarkably like the sounds heard in nature. After the president of the China Chorus Association attended their singing, he critiqued it saying, “Xiaoshuijing Choir’s sound is not only bel canto, but also has a Miao peculiarity, harmony with nature, and does not have any artificial air. They were devoted into the performance and it was very moving.”

So far, Xiaoshuijing Choir has been enjoying a broader and broader fame. Countless people make special efforts to appreciate the Choir’s performance. In Xiaoshuijing, people get chances to experience authentic Miao ethnic culture by enjoying the pleasant sounds of nature presented by its Choir.