Dao Baoshun(刀保顺) — was born in Jiegao Village, Old Town(旧城镇) in Yingjiang County(盈江县), Dehong Dai Jingpo Autonomous Prefecture(德宏傣族景颇族自治州). He  is the only national Dai opera inheritor in Yingjiang and  devoted himself to the preservation of Dai literature. Born in 1937, Dao Baoshun  is proficient of the new and old Dai language and Han language. He was the curator of Yingjiang’s cultural center, now he is retired. 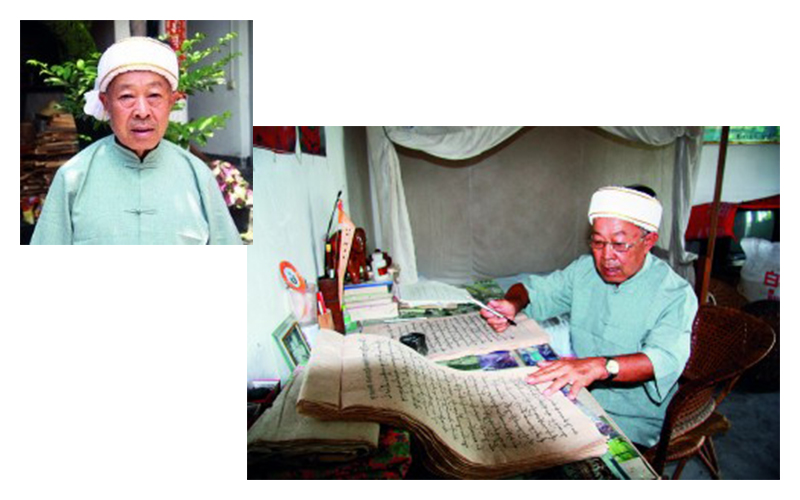 Dao Baoshun — the only national Dai opera inheritor in Yingjiang County, Dehong, who devoted himself to the preservation of Dai literature. Dao baoshun has followed his mother to learn the creation and performance of Dai opera since very young. After ten years old, he became a monk in the Peilong Temple(培龙寺) of his village. He was under the guidance of eminent monk Longfu龙福 (Zhaonong召弄 in Dai language) and Renfa任法 (Zhaoji召几 in Dai language). He systematically and comprehensively studied the techniques of Dai opera, such as composing, performing, singing, costumes, makeup, props, etc., mastered the singing and playing skills, and persistently devoted himself to the arrangement, translation, research and popularization of Dai opera for a long time.

In 1962, he adapted and processed the third scene of “Thousands Petals of Lotus”(《千瓣莲花》), an excellent traditional Dai folk play, and participated in the first Ethnic Drama Watching and Performing Conference(民族戏剧观摩演出大会) in Yunnan province, which was included in the book “Yunnan Ethnic Drama Assembly “(《云南民族戏剧剧目汇编》) in 1984.

Since the 1980 s, he collected Dai Opera more than 120 , and translated of more than 310 plays, and insist to teach Dai opera in the old town for a long time, the main plays are: “Langtuihan”(《朗退罕》), “Thousands Petals of Lotus”(《千瓣莲花》), “E Bing and Sangluo”(《娥并与桑洛》), “Haihan”(《海罕》), “The Spider Girl”(《蜘蛛姑娘》), and adapted “TheTwelve Dragon Girl”(《十二龙女》)  into song and dance drama. He is recognized as the Dai opera’s inheritor and researchers by Dai people in Dehong, made great contributions to the Dai opera’s inheritance and development.