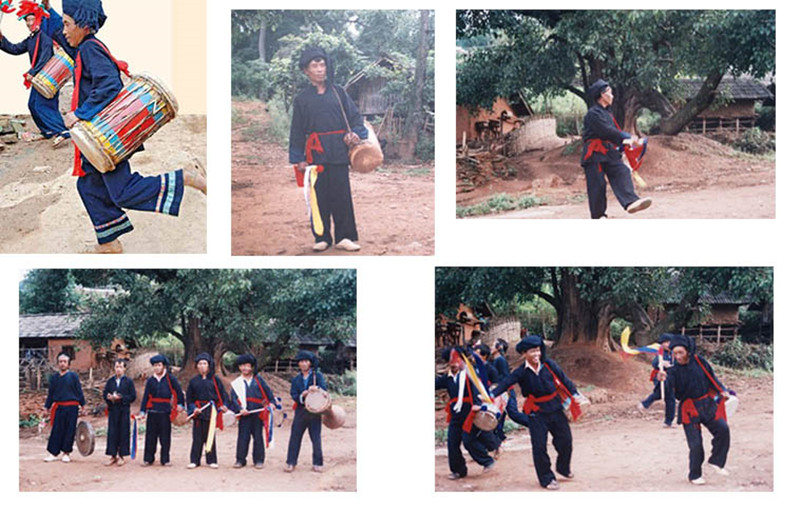 Feng Jiming grew up in the Bulang Mountain Village since childhood, and has a special liking for Bee-barrel Drum Dance. At the age of 11, he learned the bee drums production method and the bee barrels Drum Dance with the master of the village. After three years, he mastered all the craftsmanship of the bee barrels Drum, as well as the traditional drumming style and the various difficult skills inspired by the bee bucket. Therefore, he was called the “Drum King” by the masses of the village.

In 1971, he was hired by the county civil engineering team and received formal training. After painstaking study and research, his cultural level and artistic performance skills were significantly improved, and he became the “beef drum prince” of the county cultural team.

In 1984, due to lack of labor at home, he gave up his beloved work and went home for farming. After returning home, he still studied the bee barrels Drum carefully, and did not give up the persistent pursuit of national folk traditional culture.

Feng Jiming and his master, Wan Qi, both have outstanding dance skills and have been recorded by the “Chinese Folk Dance Integration·Yunnan Volume”(中国民间舞蹈集成·云南卷) as the dance inheritor of the Bulang ethnic group “Kuang Guang” (the local Bulang people refer to the drum dance as “Kuang Guang”). He is the organizer and leader of the annual festivals and activities of the Brown Mountain Village, and has a high reputation and influence among the masses.